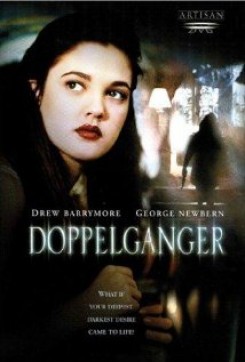 Doppelganger is a suspenseful thriller about Holly, a young woman who was accused of her mother's murder. After being picked up and questioned by the police, Holly was released. With the aid of a psychiatrist it was determined that it was not Holly who killed her mother, but her evil double side...her Doppelganger. After the brutal murder of her mother, Holly moves to Los Angeles to start a new life. She quickly finds a room-mate, Patrick, and starts to set up residence. Holly is a likable, shy type of a girl and Patrick takes to her right away. Strange, unexplainable things start to occur that make Patrick rather suspicious of Holly though. One minute he will see her downtown, but then when he returns home, there she is, just getting out of bed. One evening "Holly" seduces Patrick and then claims to know nothing about it the next morning. Patrick realizes that it wasn't Holly, but her evil side that he had seen the night before. Patrick must help Holly free herself from the Doppelganger before she commits another murder, which may even be his own.

Patrick has a pet cat, Nathan, who is seen in a few scenes lying around the house, eating and being petted. One evening Patrick is investigating a noise from an adjacent apartment, only to find Nathan hanging by his neck on the ceiling lamp cord, dead. For this scene a fake cat with stage blood applied to it's fur was used. In the apartment complex where Patrick and Holly live, one of the residents has an aviary that houses several pigeons. In one scene Holly's Doppelganger takes control and a terrible wind picks up. The aviary starts to shake and the birds flap their wings. The birds had reacted to two of the bird handlers slightly rocking the cage back and forth. These pigeons are also seen in two other scenes being fed and as background in their aviary. Pigeons are also seen in a few scenes as atmosphere, sitting on window ledges and flying through the sky in the background. There is one scene in which there is a close-up shot of a dead worm with ants crawling over it. For this, a Gummi-worm (candy) was placed on the ground and ants were allowed to crawl over it. A dog being walked on a leash is also seen in one scene.