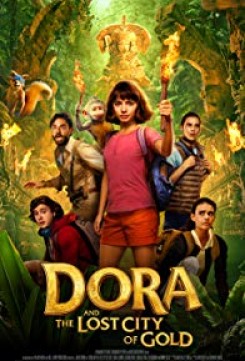 Dora and the Lost City of Gold

The famous Dora, who had grown up in the jungle, joins society by going to school. Soon, she leads some classmates back to the jungle to search for the lost city of gold.

In the scene where an actor holds a cage with a bird inside of it, the wranglers on set prevented crew from working around the bird when he was out of his cage. The wrangler was just off camera throughout filming. The bird’s wings were clipped to prevent flying. When camera was ready the bird was carried from this holding area to the perch by his wrangler and placed on the perch as required. Filming began as soon as he was on the perch. Filming went well. The bird was comfortable on his perch and happy to perch throughout filming.