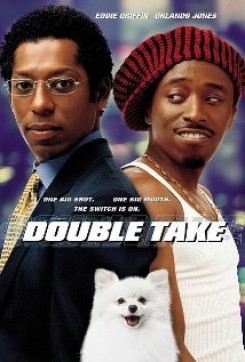 Daryl soon learns that Freddy has many surprises up his sleeve—and in his bag. Freddy owns a little white Pomeranian named Dolores that he likes to keep in his knapsack. Dolores was played by three dogs, Willow, Sasha, and Maui, and was placed in the roomy pouch by a trainer right before a scene was shot and retrieved immediately afterward—otherwise stuffies were used to make it appear as though a real dog was inside. Trainers standing off-camera used hand signals to help Dolores achieve her actions, while a clicker device got her attention for close-up shots and also made her look in a desired direction.

For Dolores's exciting car rides, a trainer was hidden in the front seat of the vehicle lying down under the dashboard to ensure that Dolores was safe while the car was in motion. The car traveled at a slow speed from point A to point B—approximately 80 feet—with one trainer in the car and another trainer at point B cueing the dog to look in his direction. Dolores's car scenes were shot without any gunfire to protect her ears from the loud noise. For her swimming scene, a diver was underwater helping Dolores along while a trainer disguised as a cast member called the dog to him.

The 52 emus in the film were leased from an emu ranch located approximately 10 miles from the set. They were kept in clean pens and provided with food and water daily. All gunfire was required to be at least 40 feet from the emus. AHA observed that the animals were unfazed by the noise, but a safe escape route was created for the birds in case they became alarmed. To keep the emus around the pool in one scene, bits of food were placed on the ground by trainers. The birds were retrieved immediately following the action.