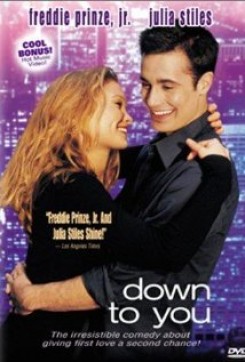 In this Romantic comedy, we meet a young couple who date and fall in love. They quickly begin to see how difficult it is to keep a relationship together. After they split up, they begin to wonder if they made the right decision. Maybe love is better the second time around but they are scared to try again.

In a very brief scene, we see a boy run past the open front door being chased by a growling dog. The boy ran past the door and the trainer verbally cued the dog to run from point A to B past the door. The growling was a sound effect added later in post production.

During a rally scene, a man dressed as George Washington sits atop a horse on a landing. The horse and trainer prepped before filming so that the horse would not be frightened. Ramps were put over the stairs and the horse, without the actor on it, was led up the ramp and onto the wide landing by his trainer. Once on the landing, the horse was able to turn around and stand on his mark. Then the actor mounted him and the trainer gave hand signals to make the horse stay on his mark. For added safety, the trainer appears in the scene in costume standing next to the horse, holding the reins and petting it.

While the characters are having a picnic, we see sheep in the background. The trainer used sheep food to encourage the sheep to stand on their marks. When some of the sheep decided to lay down in the field, the cameraman filmed them relaxing as well grazing.

Although brief, there are a few other scenes that involved animals in this film. The actor sits nearby and talks to a spider as it crawls across the floor. This was achieved by having the spider naturally crawl on the floor as the cameraman followed it and the actor looked on speaking to the spider. In another scene where fresh fish are on ice, the production provided a receipt documenting their purchase at a fish market. In the background of a party scene we see a man posing with a cat for a photo. The trainer gave the cat to the actor to hold and stood next to him in costume, posing as a guest at the party. After the shot, the trainer took the cat from the actor's arms.