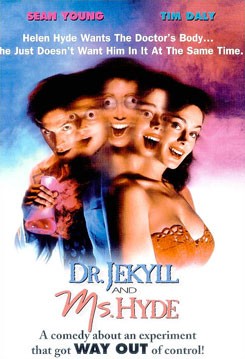 As the title implies, Dr. Jekyll and Ms. Hyde is a present day serio-comic thriller giving a new slant on the Dr. Jekyll storyline. This time our story is set in New York City and the scientist is now Dr. Richard Jax who has inherited his Great Grandfather's experimental log of 1885. Richard believes that he has discovered the error that produced the Mr. Hyde alter ego. He sets out to prove his theory by testing this new compound on himself. What happens is obvious as he transforms into a lovely young woman who calls herself Helen Hyde. Helen has a wonderful time as a woman. She has her hair done, goes on a shopping spree and, needless to say, uses Richard's credit cards. She stays around for over a week and Sarah, Richard's fiance, comes to his lab looking for him. Helen introduces herself as Richard's new assistant. In the meantime, Helen and Sarah strike up a friendship. Helen advises Sarah that she should move out for a couple of weeks so that Richard can really appreciate all that she is. In the meantime, Helen has no idea when Richard will return which is proven when, as she is sitting at her desk, Helen transforms back to Richard. Once transformed back to Richard, he realizes what Helen has done. He tries desperately to get Sarah to move back in with him, but she refuses. She does, however, accept a dinner date with him. While having dinner, Richard tells Sarah of the bizarre happenings since he has taken the compound. Although she finds it difficult to believe, Richard unwillingly proves it when he transforms back to Helen. It becomes clear that this new compound has a life of its own, and neither Richard nor Helen knows when he might transform.

Animal action is mild. Mrs. Unterveldt is one of Richard's company's top clients so whenever there is a meeting, we see Mrs. Unterveldt accompanied by her miniature poodle. She is either holding the dog or it is sitting on the table in front of her. The only other time we see the poodle is when Mrs. Unterveldt walks it down the street on a leash. This picture was filmed in Canada and American Humane was represented on set by the Montreal SPCA.