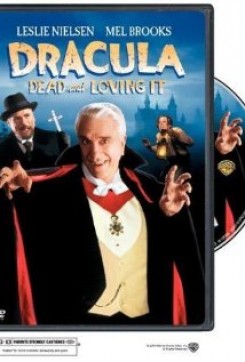 Dracula: Dead And Loving It

Dracula: Dead and Loving It is a slapstick comedy based on the story of Dracula by Bram Stoker. The story begins in 1893 in Transylvania, with Mr. Renfield, a solicitor, arriving by coach to see his client, Count Dracula. When he arrives in the village near dusk, the villagers refuse to take him any further on his journey because his destination is Count Dracula's castle. Therefore, Renfield makes the rest of his journey by foot. After arriving at the castle and concluding his business, which is the sale of Carfax Abbey in England, he is shown to his rooms for the night. Later that evening, Dracula approaches Renfield while in bed and stares into his eyes, putting him in a trance. Dracula then commands Renfield to be his slave. During the day he must protect Dracula's coffin and at night he will help find food for his master. Dracula then informs Renfield that he has chartered a ship to take them to England and his new home, Carfax Abbey. Upon arriving in England, the madness and mayhem begins as the Count settles into his new surroundings with the help of his bungling slave, Renfield.

In the opening scene when Renfield is on his way to Count Dracula's castle, he is riding in a coach. At first the pace is moderate, but as darkness nears, the coachman urges the horses to go faster. Renfield is tossed from one side of the coach to the other as it bounces up and down. After he is asked to slow down, the coachman is seen cracking his whip to urge the horses onward, ignoring Renfield's request. When they finally reach the village, the horses are foaming at the mouth from running so hard. This scene was filmed in cuts. The ground the horses traveled on was prepared prior to filming with debris and rocks being cleared from the road. Hydraulics were used to make the coach appear to rock heavily. The tongue and base of the coach was always stable and the animals were able to run on a smooth surface. The coach was driven by an experienced wrangler and two sets of four horses were used in rotation. The horses were only driven approximately 150 yards and were always given plenty of rest time in between takes. Whip cream was applied around the horses' mouth to give the appearance of foam. A felt whip was used for the shot of the coachman cracking the whip. There are several scenes where Dracula is seen turning into a bat. In one scene he fly's through the bedroom window of one of his victims. In another scene he is seen changing into a bat to escape his adversaries. As Dracula's ghoul, Renfield craves insects and can be seen in several scenes chasing his dinner as it crawls or flies around him. In one scene while talking to Dracula's new neighbor, Renfield grabs a cockroach off of the table and puts it into his mouth. During the same scene he is also seen snatching up a grasshopper, a spider and chasing after a fly. All of the bats and insects were either mechanical or fake.