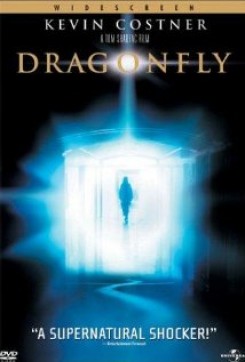 When Dr. Joe Darrow (Kevin Costner) loses his wife Emily in a tragic bus accident in Venezuela, Joe begins to notice signs that she is trying to communicate with him from the grave. Since Emily had a penchant for dragonflies, the graceful insects symbolize and mark Emily's efforts to reach Joe. Yet in order to contact her, he must learn how to interpret the signs.

Big Bird Gets the Blues

In addition to dragonflies, Emily had an affection for exotic birds, and kept a pet parrot named Big Bird. After Emily's sudden death, Big Bird becomes disaffected and depressed, culminating in a psychotic episode. It flies around the room, out of control, and attacks Joe. The bird then uses its beak to pull items off of shelves and knocks over a picture frame, ultimately landing on the floor on its back, flapping its wings. Four Hyacinth Macaws named Elwood, Jake, Blue Bell, and Jasmine trained extensively for this intense scene. Utilizing positive reinforcement and great patience, trainers prepared the birds months in advance of filming in order to achieve this action. While on-set, trainers verbally cued the birds to act from off-camera, giving commands such as "over" to prompt the bird to lie on its back, and "come" to call the bird from one perch to another. To make it appear as though the bird was sliding on its back, a slider device made of plexi-glass was used to gently pull the bird along.

For added safety, some of the larger picture windows on-set were marked with blue tape so that the birds would not inadvertently fly into them. Also, most of the items that Big Bird knocks over were rigged and secured so that they were lightweight and not harmful to the animals when they made contact. And to make the birds appear as "depressed" as their character, Big Bird, trainers clipped and added feathers and applied a non-toxic lotion to the birds, creating a ragged effect. A fake puppet bird was also on-hand to use in certain shots.

In several scenes, Big Bird merely has to sit quietly on its perch while Joe is in the foreground. From off-camera, trainers stayed as close as possible to the bird and cued it to "stay." To get the bird to look in a certain direction, a trainer would call to it from off-camera as well.

The photos of Emily in front of a waterfall holding a perched bird on her arm were actually filmed in front of a blue screen on a studio lot.

Filmed in Hawaii, a few goats naturally graze in the background of a scene.

What About the Dragonflies?

The film's namesakes were all digital effects; no real dragonflies were used during filming.