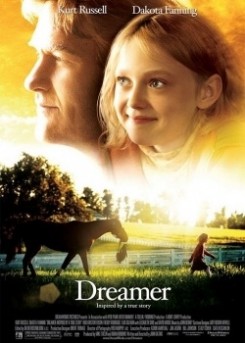 Inspired by true events, Dreamer tells the story of a great racehorse named Soñador whose career – and life – nearly end after a horrible mid-race fall leaves her with a broken leg. Seasoned horseman Ben Crane (Kurt Russell) agrees to rehabilitate Soñador with the help of his precocious young daughter Cale (Dakota Fanning). With love, faith and sacrifice, they nurse Soñador back to health and pursue the dream of entering her in the Breeders' Cup Classic.

During the opening race in the film, Sonya suddenly trips and falls – throwing the jockey to the ground – and is next seen lying on her side with a broken leg. An animatronic took the fall for the hero horse in this sequence. Trainers helped the other thoroughbreds adapt to the mechanical horse on their track by first having them run past it while stationary and eventually running with it as it moved slowly along the inner rail. Trainers used an experienced film horse for Sonya's lie-down shots, though a full-sized stuffy was used during rehearsals. The actor playing a vet only pretended to inject Sonya with a sedative.

Back in a stall at the Crane farm, the men settle Sonya into an equine rescue harness that suspends the horse in mid air to keep her off the broken leg. This device is used to treat horses with broken leg bones; prior to its development, horses with such injuries were immediately euthanized.

After raising the horse approximately eight inches from the floor, trainers placed a prop brace on the right front leg. On action, crew members used an electric pulley system to slowly lower Sonya while the actor pretended to lower the horse using a fake chain attached to a steel I-beam above the stall. Trainer Rex Peterson was in wardrobe inside the stall performing most of Russell's action.

A skittish Sonya takes Cale for a wild ride in one scene. Ben catches up to them with his car and stands at the roadside to catch Cale when she jumps off. For this action, a stunt jockey dressed like Fanning rode while a professional driver followed in the pickup truck, staying at least 20 feet away at all times. Subsequent shots of the truck driving beside the horse were filmed with a camera mounted in the pickup. An open field located at camera right offered the horse and rider sufficient space to opt out of the stunt if necessary.

Production used a mechanical horse for shots of Cale mounting, pretending to tack up, and sitting on Sonya while she was in motion. The horse was mounted on a truck and crew could electronically move all four legs and bend its neck at the poll and shoulder. This special animatronic also appeared in various insert shots during the claiming race scene as well as at the Breeders' Cup.

In the saddling ring before the Breeders' Cup exposition, Goliath Boy rears up and charges at Sonya, who responds in kind. This sequence was rehearsed with the two horses for several weeks prior to filming. Standing off camera opposite Sonya, Goliath's trainer snapped a buggy whip in the air to cue the horse to rear up. He then called Goliath to him so that the horse would walk into Sonya with his chest, pushing her sideways a couple of feet.

For the second part of this scene, trainers positioned the horse and then handed the lead to Russell. Trainer Peterson stood off camera in front of Sonya cuing her to rear up while the actor held the lead and tried to control her. Peterson then stopped snapping the whip, allowing the actor to "gain control" of Sonya until cut was called.

Several horses stood in for Sonya, depending on the action required. The race horses were in top physical condition and ran much shorter distances on camera than what a thoroughbred would normally run in one race. All race sequences were actually done in pieces and edited together to make it appear the horses ran the entire distance at one time. A vet checked each horse after every run.

Horses were prepped with a vehicle on the track to get used to the picture truck prior to filming. All the riders were professional jockeys and the production hired grooms and horse handlers from local tracks. Jockeys used exaggerated movements and hit their own legs or boots –not the horses—with the riding crops. Wranglers sponged down the horses with beaten egg whites to make them look hot after they finished racing.

The Twizzlers that Cale feeds Sonya in the film were actually made by the prop master in a special mold using molasses, a marzipan type red color, and mint leaves for flavor. The prop master worked closely with Peterson to ensure that the faux-licorice was safe and appropriate for horses. According to American Humane's Animal Safety Representative, Peterson is particular about what productions feed his animals and makes them go to great lengths to ensure the safety and quality of the food.

When Cale slipped popsicles through a crack in the barn, a crew member returned the bare sticks. The chunk of chocolate cake Sonya eats contained a horse-friendly mixture of oats and dark molasses.