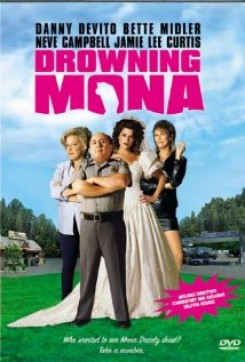 Drowning Mona is a comedy about the events leading to the untimely death of Mona Dearly, the Grand Dame of Verplanck, New York, who drowns in her sporty Yugo when it careens into the Hudson River. An investigation proceeds even though Mona is the most loathed resident in town. Creature feature is a little dog named "peaches" that gets mowed down by the lawnmower.

Other than Mona, one of the other despicable characters in town is Mona's son, Jeff. Jeff is the partner in a lawn-care business with Bobby who can't seem to get Jeff to do any work nor can he get him out of the business. Jeff and his mom, Mona, have a history of high-strung tempers, verbal abuse and even physical violence and are unapproachable by timid Bobby. Unfortunately, Jeff also has a history of running down a poor little dog, Peaches, that happened to be running in front of the lawnmower Jeff was pushing. This gives Bobby nightmares.

In one of Bobby's nightmares about Peaches'accident, the audience sees the terrible deed. Actually what the audience sees is the dog running front of an electric mower that is being pushed by the actor. For this scene three dogs were conditioned to the sound of the lawnmower motor. A trainer called the dog from point A to point B and the mower followed behind at a safe distance. The actual "accident" was left to the imagination of the viewer. The role of Peaches was ultimately played by a dog named Bonnie.

American Humane was on set to monitor the animal action in accordance with the Guidelines for the protection of all animals in media.