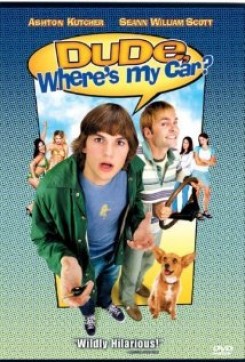 In the tradition of Cheech and Chong flicks of yesteryear, Dude, Where's My Car centers around two boneheaded stoners who find themselves tangled in a web of trouble after a night of pot-smoking debauchery. Jesse and Chester, played by That 70's Show's Ashton Kutcher and American Pie's Seann William Scott, just can't seem to find their car the next morning, and their bungled search confronts them with an alien-obsessed cult, an angry transsexual, and a lifetime supply of chocolate pudding cups. Confused? So are Jesse and Chester.

Still searching for their car, the two slackers visit a likeminded friend who happens to own "shibby-smoking" dog named Jackyl. The part of Jackyl was played by a female pooch named Sydney and was accompanied by two trainers and a veterinarian. Sydney was introduced to the actors well before shooting began to ensure that they were all well acquainted.

Ever the connoisseur, Jackyl is quite fond of a doggy shaped pipe. Sydney was trained to carry the pipe in her mouth and to growl on cue when an actor tried to take it from her. Sydney, however, did not have to actually use the pipe—an animatronic Jackyl was created for the smoking scenes. Soon, the dog runs away and covers his head with his paws—which were also animatronic.

Having worked up a formidable appetite, the dudes take a spin through a Chinese drive-thru restaurant with Jackyl seated in the passenger's seat. A safety harness was used to secure the dog inside and trainers stood off-camera while the car slowly drove the short distance.

The slackers' vehicular quest takes them to the home of a creepy ostrich fanatic. Surrounded by the enormous and aggravated birds, the guys run to a nearby car with the ostriches close behind, hissing, pecking, and rocking the car. Suddenly, an ostrich pokes its head through the top of the car, further assaulting the dysfunctional duo. Although an animatronic ostrich was created to poke through the car ceiling, real birds were also used in the scene. Six trainers were on set for the ostrich action, ensuring that all safety measures were taken. To get the birds to run, one trainer shook an aluminum can to startle them into action while the other trainers gathered the ostriches as they ran by. After the actors got into the car, the trainers released the birds near the car. A safety railing was installed to deter the birds from wandering. Ostrich food was sprinkled on the ground to inspire the birds to peck while hidden crew members shook the car, making it appear as though the ostriches were causing the commotion. The hissing noise was a sound effect added in post production.

While examining the pocket contents of his snazzy new threads, Chester pulls out a dove and lets it fly away. It flies around for a few moments and then crashes, its feathers falling to the ground. Four doves were on-call for the scene but only one was actually used. The trainer placed the doves into a special pocket sewn in the jacket. The actor reached into his pocket and gently lifted and released the dove, which flew off-camera onto a perch beside the trainer. Although the bird is not shown hitting the window, a fake dove provided by the prop department was on-hand in case the director wanted a close-up. The post-crash feathers were provided by the costume department.

Chester is an Animal Planet fanatic and is particularly fond of a show featuring Andrew the chimp. The chimp was played by the multi-talented Zak and was accompanied by one trainer and a video camera-man. The trainer placed the chimp on his mark and used a combination of verbal cues and hand signals to get Zak to display a number of different behaviors. They shot several different scenes and production decided which ones made the final cut.