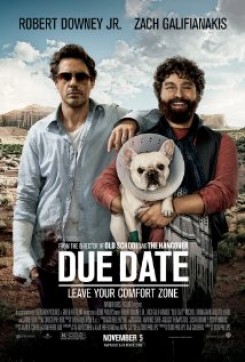 When a man accidentally becomes put on the no-fly list, he must carpool across the country with an inept, annoying stranger to make it to his child's birth on time.

Throughout the film, Ethan (Zach Galifianakis) has a pet dog, which is seen performing such mild action as sitting, standing, lying, being held in a bag, being petted, and walking or running on- or off-leash. For all of these scenes, trainers used hand signals and verbal commands to cue the mild action, which the trained dog was accustomed to performing.

Shots of the dog in a truck or car used a combination of methods: In one method, the well-rehearsed actor drove the vehicle slowly a safe distance on streets closed to traffic.. In the other, the vehicle did not actually move — the movement was simulated by placing the vehicle on a rig that crew members shook and tilted, while screens around the windows projected moving background images. In either method, the trainer hid in the back seat of the car or truck, near the dog. The dog was never in a fast-moving vehicle or a collision. Shots in which the dog appears to fly up in the air as the truck hits bumps or potholes used a combination of a stuffed dog prop and a close-up of the actor holding the real dog for the "flat surface" driving. In one scene, the truck is filled with marijuana smoke. This was created with a computer and the dog was never exposed to any kind of smoke.

As the actor steps over the leashed dog in one scene, the dog reacts by moving away. This was a well-rehearsed scene and the actor was careful where to step.

Outside border patrol, two dogs run around in a yard and two others run on the other side of a fence. All four dogs were introduced to each other before filming, and trainers placed the dogs on their marks after scattering some food on the grass.