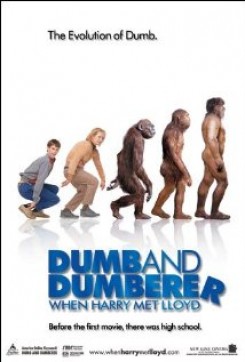 In this prequel to Dumb and Dumber, Harry (Eric Christian Olsen) and Lloyd (Derek Richardson) are teenagers. The two meet in high school while attending a "special needs" class. Unbeknownst to Harry and Lloyd, their principal is misusing the funds set up for this special class and Harry and Lloyd end up inadvertently exposing his scheme.

While American Humane (AH) did not directly supervise the on set animal action, AH screened the film and spoke with the trainers regarding the use of animals in the film. Given the information from the trainers indicating the precautions in place for animal safety, our conversations with production and trainers during pre-production, and our interpretation of the animal action as screened in the film, AH is rating the treatment of the animals Believed Acceptable.

There is a scene where a large dog chases Harry but is stopped by the chain it is attached to. Lloyd has a small dog bark and snap at him while in Jessica's yard. A young man leads a goat by a rope in a parade and there is a gold fish game at a booth at a fair in one scene.

Harry throws his apple and it lands by a very large dog, Fang, who is chained to a doghouse. The dog begins to chase Harry. Finally the chain reaches its limit and the dog is pulled back. The apple that the actor ate was real but the one he tossed was made of lightweight styro-foam. The dog was placed on its mark by one trainer while another trainer held the end of the lightweight chain that appeared to be attached to a doghouse. A trainer ran in off camera to help guide the dog in the desired direction while another trainer held the chain and gave a verbal cue for the dog to stop. After the dog stopped and was standing still the trainer pulled on the chain to give the appearance that the dog was yanked back.

In another scene involving a dog, Lloyd is standing outside Jessica's window trying to feed Harry some lines to say to her. A small dog sits in the yard staring and barking at Lloyd. He extends his hand and the dog snaps at him. A trainer put the Beagle on its mark and stood off camera using hand signals to get the dog to bark, lift its paw and even snap at the actor.

During the Thanksgiving Day celebration at the high school, there are several booths set up with food and various carnival games. One of the booths had a table set up with goldfish swimming in bowls. The idea is to toss a ping-pong ball into a bowl and win the fish that is swimming inside. This is a brief scene as the camera is panning the festival grounds. As the cameraman pans across this booth, we see a few balls tossed towards the bowls, but none go in. Later as the parade begins, we watch as a young man guides a goat on a rope down the running track of the school. The fish were supplied and maintained by an aquarium supply store. Actors lightly tossed the ping-pong balls towards the bowls. A trainer gave the actor the goat's rope and stood off camera as the boy led the goat a few feet down the track.