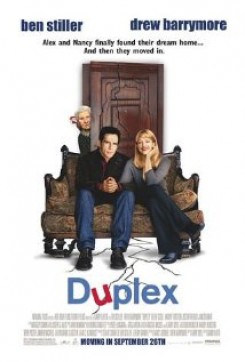 Alex (Ben Stiller) and Nancy (Drew Barrymore) a young, vibrant couple in New York City decide they want to buy a house and start their new marriage off right. When they finally find that new dream home, it comes with one feature they weren't so happy about, an upstairs, rent-controlled tenant, Mrs. Connelly (Eileen Essel). They soon discover she is neither as easy going or frail as they had originally thought. Mrs. Connelly begins to turn their new dream house into a nightmare. But how can they get her to move?

Mrs. Connelly owns a pet Macaw. There are several scenes in which the bird appears, including a scene where it appears as if the bird is inside a burning building. There is also a scene of mild action involving dogs and one with a mouse.

Mrs. Connelly, the older woman who lives upstairs from Alex and Nancy might not be so nice, but her pet Macaw is adorable. Little Dickie was named after Mrs. Connelly's late husband, Dick. Four Green Winged Macaws were on call for this part. All of the birds were prepped for the parts well before filming began. The actors were introduced to all the birds ahead of time and shown how to handle them by the trainers. Little Dickie is shown in several scenes sitting happily on his perch. The bird was placed on the perch by a trainer who stood off camera using hand signals to get the bird to achieve certain movements. The bird was also very comfortable with the actress who played Mrs. Connelly. She would pick the bird up from its perch and hold it on her arm or shoulder as she moved about in some scenes. Both were quite comfortable with each other.

The first time we see Little Dickie, is when Alex and Nancy meet him. The bird is perched next to Alex. The bird eats a bugle snack from Mrs. Connelly and then eats a chip from Alex. The bird then leans over towards Alex and begins to peck on Alex's head. A trainer stood off camera to direct the bird during this sequence, but the bird eagerly ate the snacks out of the actor's hands and then explored the actor's head naturally.

Later, Mrs. Connelly chews a piece of hotdog and feeds it to little Dickie who sits contently on his perch. When she puts some music on, the bird bobs up and down on the perch as if it is dancing. The bird naturally ate the piece of hotdog and a trainer stood off camera using hand signals to get the bird to dance.

Mrs. Connelly calls to Nancy and tells her that Little Dickie has flown into the dumb waiter and is stuck. As Nancy opens up the door to the dumb waiter, we see the bird fly down and land on top of her head. As Nancy comes out of the dumbwaiter, she moves through the house to try and get the bird off her head. As they walk up near the staircase where Mrs. Connelly is standing, the bird flies onto Mrs. Connelly's shoulder. The dumbwaiter was specially built for the production and was very wide and well ventilated. A trainer dressed up as the actress doubled for her in parts of this scene. The trainer wore a blonde wig and hid the bird's favorite toy underneath. When a close up of the actress' face was needed, Drew Barrymore was placed in front of the camera and an anamatronic bird was placed on top of her head. When the two scenes were edited together in post production, you can't even tell who is the real actress or the real bird. Ah! Movie Magic!! A trainer stood off camera and used a verbal cue to get the bird to fly to Mrs. Connelly standing on the stairs.

Towards the end of the film, we see the "dream" house on fire. As the camera takes us inside Mrs. Connelly's apartment, we see Little Dickie sitting on his perch with some flames nearby. Later we see Nancy handing Mrs. Connelly her shawl, which has Little Dickie, wrapped inside with its head sticking out of the blanket. A trainer placed the bird on its perch, which was placed twenty feet from a controlled, special effects flame. The room was well ventilated and the trainer stood just off camera using a hand signal to get the bird to flap its wings, giving the appearance it was scared. The trainer wrapped the bird in the shawl and handed it to the actress. The bird and trainer spent lots of time rehearsing for this sequence so the bird was very comfortable and well prepared for the action.

In one brief scene, Mrs. Connelly tells Alex and Nancy that she saw a rat in her apartment. Alex goes upstairs to try and find it. As he looks on the ground he sees a small mouse scurry across the floor. Mrs. Connelly tosses something at it. A trainer placed the small brown mouse on its mark and stood off camera. Another trainer stood across the room, off camera and used a buzzer to get the mouse to walk in the right direction. The trainer retrieved the little mouse long before the actress tossed something in its direction.

In one scene, as Alex runs out of ideas to get the pesky old lady out of his building and their lives, he goes into an alley to try and buy a gun. There is an old broken down car parked on the side of the alley where the two men converse. A dog is lying on top of the car and another one sitting inside of the car. A trainer placed the dog on top of the car and stood off camera using hand signals to get the dog to stay. If you look real closely, you can see the dog wagging his tail as he lays and watches his beloved trainer. Another trainer hid inside the car and watched over the second dog. Both dogs were very content to just hang out and relax while being filmed.