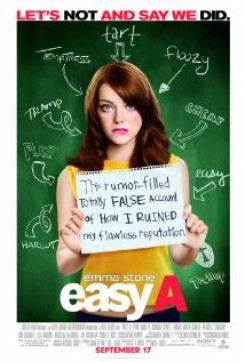 A clean-cut high school student relies on the school's rumor mill to advance her social and financial standing.

Horse and Pony A horse stands in the background of one brief scene. Two girls walk some ponies alongside a road as the credits begin to come up. The horse was placed on its mark and hobbled with a soft rope. All grounds were inspected for hazards and sets were closed and secured. The two girls were filmed coincidentally, walking their own ponies. Dog Throughout the film, Olive (Emma Stone) has a pet dog, which is seen performing such mild action as sitting, standing, lying and being petted. For all of these scenes, trainers used hand signals and verbal commands to cue the mild action, which the trained dog was accustomed to performing. Cast and crew members were introduced to the dog and instructed on its proper handling.