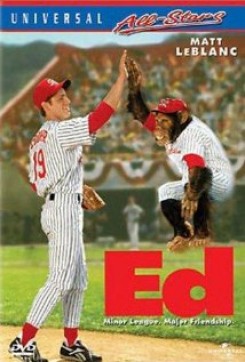 Ed is a children's movie revolving around a baseball playing chimpanzee named Ed. Ed loves two things in the whole wide world. One is playing baseball and the other is eating chocolate covered frozen bananas. Jack Cooper, the pitcher for the Rockets baseball team, has been in a real slump. His coach, Chub, comes up with an idea he believes will lift the team's spirits, Jack's in particular. He recruits Ed as a mascot. Chub forces Cooper to take Ed as his roommate while the team is in training. Through some ridiculous predicaments and slapstick comedy, we watch as Ed saves the day for the Rockets by cheering Jack on to victory as the no hit pitcher. By doing so, Ed restores Jack's self confidence as well.

Although Ed is seen throughout the movie, no real chimpanzee was ever used. All of Ed's actions were accomplished by the use of animatronics or an actor in costume. The only real animal action in the film was in the opening scene where we see Cooper at home on his parents' farm. He awakens to start his day with his hound dog, Speed, lying in the bed at his side. The two get up and proceed to tend to their chores before breakfast. Cooper feeds the chickens, tends the cows, greets a spider in its web, and brings slop for the pig, although, when he arrives at the pig's trough, there is no pig. He returns to the house for breakfast and is served a big slice of ham, thus answering his question about the pig's whereabouts. In this scene, the dog simply followed verbal commands to sit, stay, come, lay down, etc. from his trainer who was just off camera. Food was given as a reward. The farm animals were filmed in cuts on an actual farm. No pig was ever seen nor slaughtered for the ham.