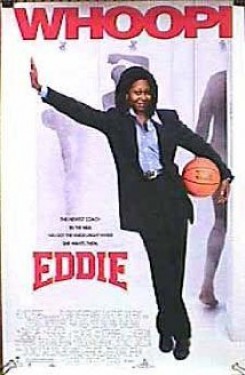 Eddie is a film about a New York Knicks fan, who after winning a free-throw contest at half time, gets her chance to be an honorary coach for the night. The Knicks have been on a losing streak and attendance has been down. However, the new owner, Wild Bill, is determined to change that and bring life back into the coliseum. The first thing he does is to shock the coaches and fans as he rides his horse onto the floor, introducing himself at the opening of the game. Then, during the game, he hears Eddie yelling as she gives coaching advice to the players from her seat. Wild Bill notices how the crowd seems to love her, so he decides to make sure her name is one of the three names called for the free-throw contest at half time. The winner is entitled to be an honorary coach for the night. Of course, Eddie wins, and after that night her life is never the same. She becomes the Knicks permanent coach following a dispute between Wild Bill and the present coach.

During the opening of a Knicks basketball game, the owner, Wild Bill Burgess, rides his horse, which is wearing tennis shoes, onto the court. While sitting on his horse, Bill makes a speech, followed by fireworks. One of the fireworks hits a retired basketball jersey hanging above the court. The jersey falls to the court in flames. The flames are immediately put out and Wild Bill, still on his horse, walks off the court. This scene was shot in cuts. The actor merely rode the horse onto the court. Special ramps were designed to keep all surfaces that the horse walked on evenly balanced. The horse wore boots specially made for him. They were constructed out of bell boots, shipping boots, and shipping pads covered with foam rubber tennis shoes. The horse had been conditioned in pre-production to be around the fireworks/noise that was used during the filming. At no time was the horse in direct line or near the fireworks.