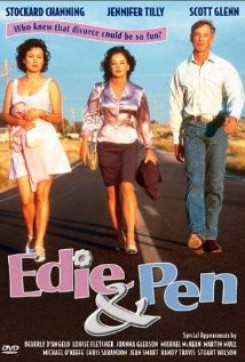 Edie & Pen is the story of two women who fly to Reno to get a divorce. Edie is a Barbie-doll type who is looking forward to divorcing her husband of two weeks so she can marry Mr. Right and start a family. Penelope Chase, known as Pen, is a sophisticated New York lady, rejected by Victor, her husband of nine years who simply tells her he doesn't love her anymore and sends her off to a lawyer. Pen assumes he has a girlfriend, but has found no evidence of one. In contrast to Edie, her life appears to have no future. Edie and Pen, along with two other women, get their divorces at the courthouse and immediately thereafter end up at the Bucket of Blood bar. There they meet several cowboys, one of whom is named Harry. Harry talks about his dog, Tilly, who was taken by his ex-wife in the divorce settlement. Edie, who is very open about her life, convinces Pen to wear more provocative clothes. Edie goes on and on about her fiancee who is going to pick her up at the airport the next day and take her to Acapulco for their wedding. Pen is shocked when she finds out during Edie's conversation that her fiancee is none other than her own husband whom she is divorcing. Pen calls her ex-husband, but only gets his impersonal answering machine. She is full of despair, disbelieve and hopelessness. She is saved from a suicide attempt by Harry and they fall in love. They go to a country western performance at a bar and are enjoying it when a small disheveled dog runs onto the stage. Harry recognizes the dog as his dog, Tilly, as the dog jumps into his arms. Pen reluctantly accompanies Edie to the airport in a cab as Edie bubbles over at the thought of Pen meeting her fiancee. She encounters the uncomfortable Victor and the secret is revealed. In a split moment, we see that Edie is torn between her friend and Victor, knowing now that he has lied to her. She chooses Victor, but tells Pen that Victor is in for a bumpy ride. The women agree to remain friends despite the circumstances.

Edie stops to see a fortune teller on her way to the Bucket of Blood bar. Maude, the fortune teller, picks up a sleeping cat off one of her armchairs and gently places the cat on a table, thereby making a place for Edie to sit for her reading. As Edie comes out the door, after her fortune has been told, another female customer comes toward the entrance to see Maude. She is accompanied by a large dog who pulls her towards the entrance. In the scene where Edie lends Pen some provocative clothes, she has a flashback of her two-week marriage. A drowsy bull dog lies on the floor near her bed. She looks at the dog and it barks loudly at her as she secretly prepares to leave. After this scene, they walk down the street to the bar. On their way, they pass a woman, Harry's ex-wife, with a small dog on a leash. In the last bar scene with Harry and Edie, a small dog comes down the aisle toward the stage. The dog jumps onto Harry's lap from the stage.