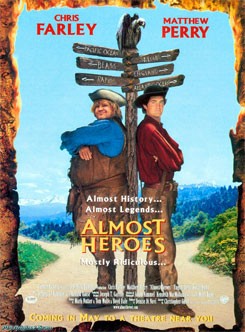 Edwards And Hunt is a parody of Lewis and Clark and their journey from the east coast to the west coast.

There are several scenes where horses and buckboards are traveling from point A to B in a town or across the prairie. A turtle is seen crossing the road and a squirrel on a river bank eating a nut. In another scene buffalo are grazing in a field and an eagle is seen flying through the air in pursuit of Hunt. Stock footage was used for the portion of the scene of the eagle flying towards Hunt. An animatronic eagle was used when Hunt is seen struggling with the bird. In camp one night a bear is seen walking A to B towards Hunt and then later, he grabs a mans foot, dragging him out of camp. This scene was shot in cuts. A real and an animatronic bear was used. The trainer off camera, lead the bear through the camp. When the bear is seen dragging the man from camp it is actually dragging a dummy. A boar is seen grazing in a filed. The trainer placed the boar on his mark and placed food stuff on the ground so he would graze.