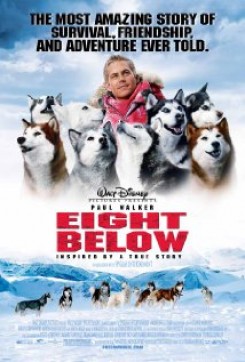 Set against the stark beauty of the most desolate continent on earth, Eight Below explores both the human-animal bond and the living spirit's will to survive against even the harshest circumstances. Antarctic survival guide Jerry Shepard (Paul Walker) must leave behind his loyal team of eight sled dogs when the "storm of the century" approaches. Although he plans to retrieve them immediately, weather conditions prevent their swift rescue, and the dogs are forced to fend for themselves for months in this frozen wilderness. Despite the financial cost and narrow odds of finding his canine family again come spring, Jerry is determined to mount a return expedition in the hopes that some of the dogs have survived.

Since the story of Eight Below revolves around the bravery of a group of sled dogs, the filmmakers decided to use both Hollywood hounds—Siberian huskies and Alaskan malamutes—and a native breed known as the Greenland dog. The Greenland dog originated in the coastal Arctic regions of northern Siberia, Alaska, and Greenland and is believed to be one of the most ancient breeds. All three of the breeds used are classified as "working dog" breeds, which are genetically adapted to frigid temperatures; hence they were ideal for work in this film.

All in a Day's Work

In some scenes that take place outside the research station, the dogs appear to sleep or rest while burrowed in the snow. Trainers dug out shallow dens in which they cued the dogs to curl up and stay. Using plastic milk jugs with the bottoms cut off, these large funnel-like devices created air holes for the dogs when they were fully covered in snow. Trainers then used their hands to lightly cover the dogs while talking soothingly to them. These takes were very quick—often under one minute. All dogs were gradually acclimated to their "snow blankets" and trainers offered frequent food rewards as positive reinforcement and encouragement for their cooperation.

In several shots, Jerry drives the dogsled loaded with passenger Davis "Doc" McLaren (Bruce Greenwood) and their equipment. Trainers—not Paul Walker—drove the sled for these shots on fresh, debris-free snow that offered good traction. During action performed on steep hills, the sled was pushed by an off-screen crew member or pulled by a snow machine. The sled dogs ran only straight paths, no curves, to keep their lines from tangling. According to our Safety Representative's field reports, the Greenland Sledding Association was also present during filming to inspect the sleds and harnesses, which met with the group's approval.

When Doc falls through thin ice and nearly drowns, "Maya" comes to the rescue by crawling over to the man and slipping a rope over his head. The rest of the sled team then pulls Doc from the water, saving his life. To film this scenario safely, the filmmakers built an enormous set of wax and fake rock to look like Antarctica's ice floes. The dog playing Maya was extensively prepped for this action, and the rope had a wire inside to maintain a round shape and make it easier to slip over the actor's head. The floor was made of wax and wood over a water tank, and trainers stayed with the dog until the cameras rolled. When the dogsled team pulls Doc out of the water, the hauling action was assisted by a cable which the filmmakers digitally erased later.

Life on Their Own

Outside the research station, the eight hero dogs are individually tethered along a chain staked to the ground. The dogs twist out of their collars and free themselves from the chain a few days after the humans leave. Called a "gang line", this 30-foot-long chain had stakes at each end and in the middle to secure it to the ground, and the dogs were fastened to the line by shorter pieces of chain clipped to their collars. For the scene in which they break free from the gang line, the dogs wore quick-release collars that came undone with minimal movement. When "Truman" nips at the collar of his twin brother "Dewey" to help unshackle him, the collar was made to break away via a tug on a translucent line held by the trainer off screen. The starved dogs break into two groups and ambush a flock of birds in one scene. This sequence required a clever mix of trained behaviors, live action, and computer generated images (CGI). Trainers set up the scene by scattering food on the ground for a cluster of real birds to enjoy. However, the birds were all CGI when the dogs entered the scene.

To get the dogs to run around and jump up as though attacking their prey, trainers stood on elevated platforms and dangled fishing rod-like instruments that had lures tied at the ends. These lures contained treats wrapped in feather-covered tea towels. On cue, they ran and jumped after the lures and the trainers eventually let the dogs have them. The birds seen in the dogs' mouths were all stuffed props.

As their ordeal drags on, Dewey falls down an embankment and gets badly injured. Trainers set up the scene using a real dog at the top of the slope wearing a harness for safety. A stuffed prop dog took the tumble down the hill, enhanced by CGI.

In a harrowing sequence, "Max" finds a dead, beached orca (killer whale). Just as he is about to take a bite of it, a ferocious leopard seal emerges from within the carcass and terrifies the dog. Starved and undeterred, Max and the other dogs coordinate to distract the seal away from the orca. Though it works for a moment, the seal returns and grabs Maya by the leg, dragging her off and away from the whale. Seeing their pack-mate down, the dogs band together and attack the leopard seal until it finally retreats.

Three animatronic seals were built for this film, each with a moveable head, eyes, nose, lips, and jaw with soft teeth. The completely synthetic orca was smeared with baby food and had four meaty bones hidden in the whale "flesh" to entice the dogs; snow on the whale was made of flour in case they accidentally licked it. A puppet seal head, operated by a trainer, actually does the biting on Maya's leg, and a stuffed dog stood in for her during the "drop and drag" shot. A bait bag inside the seal and a thin layer of peanut butter outside enticed the dogs to attack it, and crew members off screen pulled the seal with a rope to simulate a reaction.

American Humane's monitoring oversight has grown in leaps and bounds since the first film version of this story—a Japanese production titled Antarctica—debuted in American cinemas in 1984. See our review of the original film to compare its rating and what American Humane came to learn about the questionable animal treatment on that international production. Times have changed, and American Humane is pleased to see that attitudes toward animal welfare on the set have vastly improved during the ensuing years.