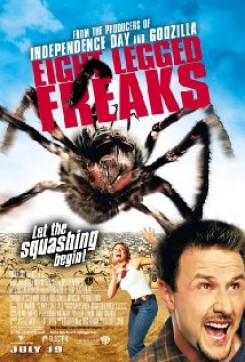 Wayward rebel Chris McCormack (David Arquette) returns to his small hometown just in the nick of time - it's about to be invaded by gargantuan, toxic-waste-mutated spiders, more affectionately known as "Eight Legged Freaks!" Chris teams up with foxy yet wholesome Sheriff Sam Parker (Kari Wuhrer) to fight off the hostile arachnids and save the town from B-movie destruction.

AHA was on set to ensure that no animal (or giant mechanical or computer-generated spider) was harmed in the making of this film.

At Taft's Exotic Spider Farm, various spiders crawl in their terrariums, jumping around and eating crickets. One spider manages to escape, crawls on a man and bites him. This daring act of defiance spawns a full-fledged spider rebellion, as the testy arachnids flee their confinements and wreak havoc on the room. One particularly eager spider jumps on a nearby sassy-talking parrot, knocking it off its perch and rendering its earlier squawk of "I see dead people" eerily prophetic.

A spider wrangler brought approximately 20 tarantulas to the set and kept them in their terrariums for most of the action. The escaped spider in the scene was placed on the top of its tank by the wrangler, and it naturally crawled onto the actor nearby. It did not actually bite the actor. The unsuspecting parrot was a Macaw that was trained to jump down from its perch onto a lower perch. The spider attacking it was all computer-generated. The spider attacking the cricket was also CGI. Fake synthetic spiders were also placed around the room and on the actors to supplement the CGI spiders that were added in post production.

Though most of the giant spiders featured in the film are computer-generated, Production also created and used huge arachnid puppets for certain scenes.

A cat, Zeke, sits on the floor and then runs into a hole in the wall. From behind the wall, Zeke is heard hissing and crying as he becomes the evil giant spiders' next victim. The kitty's imprint is left on the wall. Four cats were on call for the role of Zeke, but Slick got the final call back. Trainers hid inside the fake wall and used a buzzer noisemaker to cue the kitty to investigate the wall area. Slick eventually ran inside the hole to a trainer, who rewarded the kitty with a treat. The imprint and cat screams were all special effects.

At an ostrich farm, ostriches are suddenly pulled underground and consumed by the spiders. A group of the big birds run around their pen as the remains of their pals scatter the ground. Filmed at an ostrich farm in Arizona, 20 of the birds were on call for this scene. The tamest of the herd, Freddy, was used to simulate being pulled into the ground. For this, a hidden trainer gently pulled downwards on the neck of the bird, making it appear as though the entire animal was being yanked through the dirt. Production used a giant fan to circulate feathers into the air and CG effects to add to the illusion. Trainers also herded the birds to flock to certain areas of their pen.

Bruiser sits on top of a desk. Chris enters the room and Bruiser jumps off of the desk and runs to bite Chris's leg. Trainers placed the Boston Terrier on its mark and signaled it to "come" from off-camera. A trainer held a toy behind the pants leg of the actor and the dog ran over to grab it, simulating the leg bite.

A woman sits in a crowd holding Bruiser in her lap. A trainer handed the dog to the actress, who held it throughout the scene.

Later, Bruiser trots down some stairs and barks at a hole in the wall. A spider reaches out and grabs the now whimpering dog, pulling it back inside the wall. A trainer placed the dog on its mark and cued it to come down the stairs and bark. Another trainer hid inside of the fake hole in the wall and cued more barking from the dog. Treats were placed around the hole to prompt the curious canine to sniff the area. The dog being pulled into the wall and the whimpering were both special effects.

During the opening credits, a bunny hops over to the side of the road and sits. Suddenly a truck barrels down the highway, narrowly missing the bunny. Two cottontail rabbits shared the role of the scared bunny in this scene. Trainers placed a gentle harness on the rabbit and held onto it with an attached cable from off-camera. The road was cleared of all traffic while the bunnies worked. The rabbits were filmed sitting on the road as a light was shined on them as if from a truck. When the real truck barreled down the road, a fake rabbit took the place of the live animal.

The Film and TV Unit of the American Humane Association (AHA) monitored the action sequences involving animals. The AHA has sole authority, through a contract with the Screen Actors Guild, to protect animals used in film and television.

Inspectors reviewed the script and action scenes before and during filming to ensure that animals were not harmed or mistreated and that AHA Guidelines for the Safe Use of Animals in Filmed Media were upheld. They also monitor conditions in which animals were housed during production.