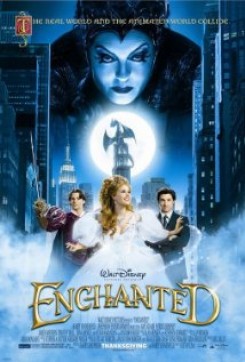 "No Animals Were Harmed"®

Giselle (Amy Adams) is a fairytale princess from the past who is thrust into the present day by an evil queen (Susan Sarandon). Soon after her arrival in New York, Princess Giselle meets a handsome lawyer (Patrick Dempsey) and begins to change her views on life and love.

Rats stand and sit on a chair, some on the arm, some on the cushion. One rat walks under the chair and sits. Trainers used food treats to get the rats to achieve the action and look in various directions.

Several rats crawling on an end table jump off and leave. A trainer placed the rats on their marks and used a bait stick with food on the end to get the rats to look and jump down. Stuffed prop rats sat in for the live rats when the scene was being set up and rehearsed so that the rats were not too tired for filming.

As brides and grooms perform a musical number in the park, some dogs appear in the background, either on leashes or sitting on a park bench. These dogs, which were always on leashes, were with their owners, who doubled as the actors. The scene was filmed in a shady area of the park. A horse and carriage also appear in this scene. The carriage was a working carriage that routinely takes passengers around Central Park, so the horse was very accustomed to both people and the park. The outdoor set was closed off to the public and only necessary cast and crew were allowed in the park during filming.

The large aquarium that appears at Robert's (Dempsey) office was supplied and maintained by Aqua-Visions, who also provided an on-site representative knowledgeable about betta fish to be present during the filming of the scene. Princess Giselle (Adams) appears to take a fish from the top of the aquarium and put it in her mouth, walk over to a glass of water on a desk, and spit the fish into the glass. This scene was filmed in separate shots. The fish swimming in the aquarium were real. The one that the princess put in her mouth and spat out was a fake edible betta fish made by the prop department.

Pigeons enter Robert's apartment through a window and later are perched on a statue. These scenes were filmed in front of a green screen. A trainer released one pigeon from a release box. Another off-screen trainer cued the pigeon to fly to him. The statue was a prop placed on a secured platform. It was inspected by the trainer and the American Humane Animal Safety Representative before filming began. One trainer placed a pigeon on top of the prop while another trainer stood off-camera holding up a birdseed stick and some food to get the pigeon to look in various directions. This was repeated one at a time with other birds. Then in post-production, the birds were "cloned" by a computer to make it appear as if there were many of them. A pigeon later flies behind Nancy (Idina Menzel) when she is in Robert's apartment building. One off-screen trainer stood on one end of the hall, while another stood on the other end. As the actress was walking down the hallway, the bird was released from one trainer's hand and flew to the other trainer where it was retrieved.

Two white doves sit on a branch behind Giselle as she is in Robert's office. For this shot, a trainer placed the birds on the branch and stood nearby with a net, just in case they decided to fly off.

Rats and pigeons help Giselle clean the apartment. A few real rats and pigeons were the only live animals in the scene. More rats and pigeons, as well as all the other animals and insects in this scene, were computer-generated. Trainers placed the rats and pigeons — whose wings were taped so they could not fly very high or far — on their marks around the living room. This scene was filmed in several shots. Trainers stood just off-camera throughout the scene. The scene took place on a soundstage and only necessary cast and crew members were allowed on set. The actress was instructed to move about the room, cleaning. Rats were filmed in front of a green screen walking from one trainer to another. The pigeons were also filmed separately flying from one trainer to another. This footage was enhanced in post-production, and backgrounds, other rats and pigeons were added via computer. The footage was then inserted in several scenes throughout the film.

Outside Robert's apartment building, a woman walks a white poodle, which sniffs around and urinates on Prince Edward's boot. The trainer scattered some food around to entice the leashed dog to sniff. A plastic tube connected the dog to a canister of water. On the trainer's verbal cue, the dog lifted its leg and an off-screen crew member pushed a button on the canister, causing water to run down the plastic tubing.

As Edward (James Marsden) knocks on a door, a man holding a cat opens the door. The cat hisses at Edward. The actor was introduced to the cat before filming began. A trainer stood off-camera and used a toy to get the cat to hiss and look in the right direction.