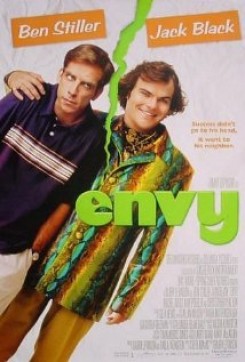 The lifelong friendship between Tim Dingman (Stiller) and Nick Vanderpark (Black) starts to crumble when one of Nick's outrageous inventions actually hits pay dirt, leaving Tim permanently out of the loop. Vapoorize, an amazing new spray that makes dog poop—or any other kind, for that matter—vanish into thin air, converts Nick into a multimillionaire overnight and sews the insidious seed of envy into Tim's heart.

In the beginning of the film, Nick and his family sit around the kitchen table having breakfast while "Rufus", their Old English sheepdog, lies on a bench at the table. A trainer positioned the dog on the bench and stood off camera cuing it to stay.

Nick's children entertain guests with a musical show one evening on a stage built inside their house. "Rufus" sits on stage enjoying the spectacle, and when the children finish, the dog steps off stage and leaves the room. After putting "Rufus" on his mark, the trainer stood off camera and used a combination of hand signals and verbal cues to get the dog to sit and stay and then eventually exit down the stage steps and through the room to another waiting trainer.

When the children run down the stairs for some flan, "Rufus" is right behind them. One trainer stood at the top of the stairs and released the dog, who came down the stairs with the kids to an awaiting trainer.

Nick and his family stand in the driveway with "Rufus". The dog does his business and Nick spays Vapoorize on the poop, which magically disappears. A trainer put the dog on mark and verbally cued it to get "into position". The dog assumed the position and some rubber poop was placed beneath him.

A small, gray terrier mix named Gizmo played the part of "Wally", the Dingman's pet dog. Tim's family also makes its first appearance in the film during breakfast. "Wally" jumps up on a chair at the table and when Tim enters, he picks up the dog and sets him on the floor. A trainer placed Gizmo on his mark and stood off camera using a combination of hand signals and verbal cues to get the dog to achieve the action.

In one scene, Tim and his son finish up a bedtime story while the dog lies in bed with them. A trainer put the dog on his mark and then stood off camera as Gizmo hunkered down and relaxed while the characters talked.

On their way to work one morning, Tim and Nick stop at a corner and see a man waiting patiently for his dog to answer nature's call. The owner then picks up his dog's "output" with a plastic bag. A trainer handed the dog to the actor and then the two waited until the dog did what came naturally while a cameraman captured it all on film.

When Nick and Tim enter a hotel lobby in a later scene, a woman walks by leading a small dog on a leash. A trainer handed the dog to the actress right before filming and retrieved it afterwards.

The part of "Corky" was played by Agusto, and another horse, Ghost, was also on call to stand in for Agusto if needed. In one sequence, Natalie Vanderpark (Amy Poehler) paints a portrait of her daughter Nellie sitting next to "Corky", who is lying down on the lawn. The production used both horses for this scene but only one performed in front of the camera.

To make the ground softer and more comfortable for the horse, crew workers put down sand and fresh new sod all over the area. A wrangler cued Agusto to lie down, and once the horse was settled, mother and daughter took their marks and the camera began to roll. Another wrangler off screen walked Ghost around to attract Agusto's attention and get him to look in various directions. When the scene ended, the actresses left the set first and the trainer verbally cued the horse to stand. Both horses were then led off to a nice cool trailer for a rest.

Tim later sits in his car watching Nick frolic on horseback in his front yard, galloping hither and yon and rearing "Corky" with gusto. Nick sees this action through his rear view mirror, as does the audience. A trainer worked with Black beforehand to show him how to handle the horse. The actor mounted Agusto and trotted to another trainer standing about thirty feet away. The actor then dismounted and got on a fake stuffed horse built by the props department and placed on a thick board laid across two ladders. This made it appear as though the actor was actually on the horse when it reared up. After this segment was filmed, a stunt rider dressed as the actor rode the horse around the yard; when an off-screen trainer cued the horse by cracking a whip in the air, the horse and stuntman reared up. Editing wizards in post production took all of this footage and stitched it together seamlessly so it looks like Black is on the horse the entire time.

In one scene, Tim shoots an arrow in the air and it flies toward Nick's house. A horse's whinny and a thump are then heard, and the assumption is that Tim has shot "Corky". Tim goes to check it out and discovers "Corky" lying dead with an arrow sticking out of him. The props department crafted two stuffy horses – one covered with cloth and the other with fake hair – which stood in for "Dead Corky" during several gags throughout the rest of the film.

Nick and Tim take the product to Italy to see if it will sell. In one scene, they spray Vapoorize around some birds scattered on the ground where they're walking, and later they spray it near a flock of sheep in a pasture. Both of these scenes were filmed naturally and the can of Vapoorize contains only air.

The animals seen hanging on the walls in Nick's house were made by the props department.