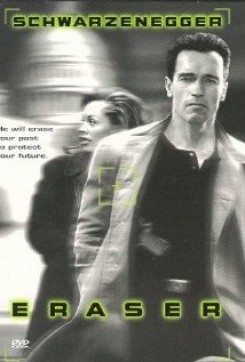 Eraser is a film about John Kruger, a U. S. Marshall working in the witness protection program. John's covert name is Eraser. His new assignment is to protect Lee Beller, a Cyrex employee. Lee is prepared to testify that Cyrex has been selling arms and top secret information to foreign countries. After getting Lee to a safe haven until the trial John's mentor, Robert Deguerin, a.k.a. the Samaritan, comes to John and informs him that there is a mole in the organization. Three witnesses have been found dead. Three other witnesses are in protective custody. One of them is Samaritan's witness and the other is Lee, John's witness. Samaritan suggests that they move their witnesses immediately. For some reason John does not feel good about the move so he suggest that they move Samaritan's witness first. When the witness location move goes bad and the witness gets killed, Samaritan informs John that they must move his witness next. But again, John has bad vibes about the proceedings so he gives Samaritan a false destination for a flight plan. Instead of going to New York he tells them that Lee is in Atlanta. While on the plane, John drinks a bottle of water which has been drugged and it is then that he is positive that Samaritan is the mole. Before John looses consciousness, he calls the pager he gave Lee and puts in the code to let her know to get out and meet at their designated rendezvous point, the New York Zoo. After jumping safely from the plane via parachute, he makes his way to the Zoo and finds it surrounded by FBI agents. Samaritan new John would call and have a code for his witness. Therefore, he had a tracer on John's cell-phone and traced the call to New York. When John finds Lee, she is trapped in the alligator exhibit building, surrounded by Samaritan's men. John crashes through the door and shoots the tank holding the alligators, causing chaos as the alligators start attacking the agents. After escaping from the zoo, John calls his captain and tells him about Samaritan. It is then that John finds out that Samaritan set him up for the murder of another agent on the plane and has everyone believing that he is the mole. It is now up to John to protect his witness and retrieve the necessary information needed to prove his innocence and Samaritan's guilt.

When John goes to the zoo and shoots the alligator tank, it explodes and water is seen rushing out of the tank along with several alligators. The agents are frantically trying to get away as the large predators are coming at them. One man's arm is bitten off while another man's head is swallowed up in the jaws of an alligator. As John and Lee are making their way to freedom, an alligator charges at John's foot several times and he kicks at the animal to hold him off while he reaches for his gun. He shoots the alligator in his open mouth just as it is descending on him once again. Real alligators were used only for the establishing shot of the holding tank. There were no real alligators in the tank at the time of the explosion. Rubber and mechanical alligators were used throughout the rest of the sequence. There is a scene at the dock where Samaritan is attempting to load a shipment of guns onto a freighter and John shows up to stop them. While John is climbing along a building, a flock of pigeons fly off. For this scene trainer #1 merely released the pigeons while trainer #2 called the pigeons to their receiving box. Later in another scene at the docks, John is crawling under the flooring of a warehouse while hiding from the enemy. Two rats crawl in front of him. John takes his hand and gently nudges the rats out of the way and proceeds on his way. The rats had been placed on their mark by their trainer and retrieved after completion of the scene. Other animal action consists of some monkeys seen briefly at the zoo, a cat seen at the docks, and a dog seen at a junkyard. When Lee is at the zoo she is seen standing in front of a cage and there are some monkeys inside. The monkeys are seen clinging to the cage and squealing. The trainer had placed the monkeys in the zoo cage and used verbal and hand signals to cue the monkeys to grab the front of the cage and squeal. The cat seen standing on a closed oil drum at the docks meows and jumps down. He was following verbal commands of his trainer. When John escapes from the plane, he lands in a junkyard. Some kids come around the corner followed by a barking dog. The dog, following his trainer's commands, is later seen sitting on top of the hood of a car.