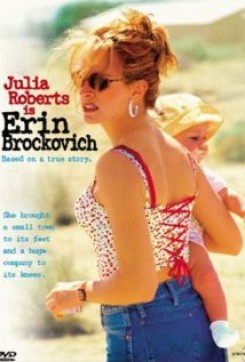 Erin Brockovich is a true story about a down-on-her-luck single mother with a conscience. After successfully begging for her new job at a law firm, Erin (Julia Roberts) uncovers a corporate scam to hide a major health-care crises in the small, desert town of Hinkley, CA. Erin's brazen determination - and the help of her curmudgeonly boss Ed Masry (Albert Finney) - ultimately pay-off, as the unlikely heroine takes on and triumphs over corporate America.

Touched By A Roach

Although roaches are generally shunned as pesky annoyances, several waterbugs actually serve as catalysts for Erin's self-discovery. Frustrated and broke, Erin holds her baby girl Beth in one arm while she reaches into the kitchen sink for a pan. Suddenly a roach emerges from underneath the pan, prompting Erin to drop the pan back into the sink. She then decides to take her children out to eat instead of cooking, allowing her quality time to spend with her kids. For the scene, the animal wrangler plugged the sink drain and collected the unharmed waterbugs after their job was done.

Later, as Erin haughtily reprimands her well-meaning biker beau, George (Aaron Eckhart), another roach scurries across the kitchen floor. Livid, Erin attempts to smash the bug under her foot but misses. This instigates an angry tirade directed at George, revealing to him the extent of her frustration and exhaustion. To ensure that no roaches would escape, the trainer blocked the area with brillo pads and retrieved the bugs immediately. The trainer then placed the waterbugs back into their cereal and rice-filled plastic containers until they had another moment to shine. While collecting contaminated water samples near the Hinkley water plant, Erin finds a dead frog floating upside-down in the polluted water. She grabs the frog by its leg and places it in a plastic baggy to use as evidence. The frog was actually fake.

At the Hinkley community picnic, children ride ponies in circles in an enclosed area in the background. There are actually four ponies providing the rides in the scene: Shrimp is 30 years old, Dash is 6, Carlotta is 28, and Ranger is 50 years old! All of the riders were children under 90 pounds and were instructed to be extra gentle to the ponies. The animals themselves were hooked up to halters and lead lines with clasps to keep them close together. Two trainers were inside the area with the ponies at all times. Several scenes take place on a dairy farm. For these shots, cattle - who were actual denizens of the farm-were lined up in two rows inside a stable and were hosed down by an actor. An experienced farmer taught the actor how to hose down the cattle properly. In another scene, cattle chew on hay in the background, an activity they heartily enjoy.