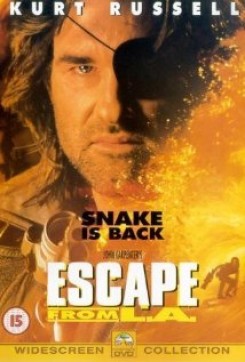 Escape From L.A. is a futuristic film about an earthquake measuring 9.6, and the devastation it causes when it hits the United States on August 23, in the year 2000. Thirteen years later, in the year 2013, Los Angeles is an island and declared no longer part of the United States. It has become the penal colony for all people found undesirable or unfit to live in the new moral America. Recently a major crisis has taken place, the president's daughter has stolen a valuable box containing a computer disk, that can shut down every known power source on earth. The government brings in Snake Plissken, a former hero, turned criminal. To assure Snake's cooperation, they infect him with a terminal virus and give him ten hours to get to the island, retrieve the box, and dispose of the president's daughter. His reward, is a full pardon and the anecdote.

There is a scene where Snake, while driving a motorcycle, is chasing the president's daughter and Cuervo, her accomplice, while they ride in a motorcade. One of the bodyguards for Cuervo is following the motorcade on horseback, with Snake in pursuit. The rider turns in his saddle and shoots at Snake. Snake shoots at the rider and the man is seen falling off the horse. The scene was shot in cuts. For safety precautions, cotton was inserted in the horses' ears and barium shoes were applied to his feet. A stunt-rider canters the horse down the street approximately 100 ft. away from the moving vehicle. As the horse and stunt-rider move in closer to the vehicle, the stunt-rider slows the horse to a trot and simulates being shot from the horse. The motorcycle is not present for the segment of the stunt-rider falling off the horse.