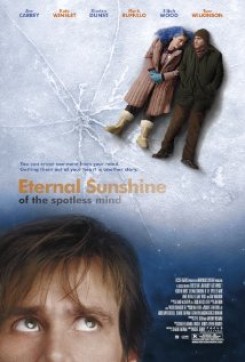 Eternal Sunshine of the Spotless Mind

When Joel (Carrey) learns that his girlfriend Clementine (Winslet) has had her memories of their turbulent relationship erased, he desperately contacts the inventor of the process to have her removed from his own memory. As Joel's memories progressively disappear, however, he begins to rediscover their initial passion and frantically attempts to halt the procedure. The doctor and his assistants pursue Joel through his maze of memories, but it's clear that he just can't get Clementine out of his mind.

This film contains mild to moderate action involving birds, dogs, elephants and horses. One scene depicts a child smashing a dead bird with a hammer.

In a few different scenes, Joel wakes up and looks out his bedroom window at two birds in a cage hanging nearby. Production explained that a trainer put the birds in the cage and made sure it hung securely for the shoot.

During a flashback of a crowded beach party, one person walks a dog on a leash while another dog hangs out sniffing the ground. For this scene, trainers put each dog on its mark and stood off camera while the dogs acted naturally. The dogs were introduced to each other and the actors beforehand and felt comfortable on the set.

Another flashback scene shows six-year-old Joel and his friends standing around a red wagon with a dead bird inside. The boys goad Joel to smash the bird with a hammer. The first shot in this sequence is of the dead bird in the wagon; then Joel is seen smashing the bird below frame. The final image shows the mangled bird after the beating. Production submitted documentation for the prop bird.

Elephants and horses walk down a street surrounded by curious on-lookers. Production told American Humane that these animals were part of the Barnum and Bailey Circus, which happened to be in town while they were filming, and that the cameraman filmed the elephants and horses as they made their way down the street and into the big tent for the show.