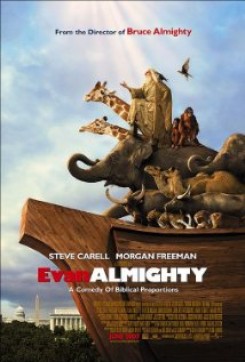 Congressman Evan Baxter (Steve Carell) is contacted by God (Morgan Freeman) and told to build an ark in preparation for a great flood. It takes awhile for Baxter to believe God and even longer for the rest of the town to believe that Baxter hasn't lost his mind.

Safety Measures for All Animals

All animals were brought to and from the set either on leashes or in cages, based on species, and fencing or hotwire surrounded the set. All cast and crew attended meetings on the handling and safety of the animals. All areas were inspected and cleared of debris by American Humane's Certified Animal Safety Representatives prior to the animals arriving. The set was closed to all but necessary cast and crew. Creative camera angles, film speed, and computer-generated imagery (CGI) play a big part in making the animal action in this film look more "intense" than it actually is. When working with animals in front of blue and green screens, trainers and wranglers wore blue or green suits to blend in. They were easily digitally removed from the film in post-production. A large chain-link fence was constructed for the crew's safety when animals like lions, tigers, bears and wolves were working. Carpets were laid down for horses to walk safely on the set. Puppy pens kept animals like chickens contained until the cameras rolled, and then the pens were removed from the scene.

In several scenes, the camera pans the area and we see various animals sitting or standing around. These scenes were accomplished by each animal's individually assigned trainer placing the animal on its mark, stepping out of frame as the camera begins to pan, then stepping back to the animal once it is out of frame.

When the alpaca spits in Ed's (Ed Helms) face and foams at the mouth, a nontoxic food starch mixed with chopped spinach was used for the "spit" makeup. The animal remained on a lead held by an offscreen trainer for the duration of the scene.

Evan (Steve Carell) begins to build the ark with the assistance of several animals. The animals were all filmed separately in front of a green screen. The items that the animals used, such as a log the baboon rolls and the blocks of wood that the elephant pulls, were lightweight props. Long, lightweight monofilament lines were attached to the animals and held by offscreen trainers to better control the action. The animals were well-rehearsed and comfortable with the actions.

The animals that appeared in the scene with the car were filmed separately and mostly in front of a green screen. Perches were mounted to the top of the car for the birds to land on. For the part of the scene in which the sheep jump out of the car, trainers placed the sheep inside the back of the car and then the sheep jumped out on the trainers' verbal command. The part of the scene in which the sheep are shown inside the car was shot on a stage in front of a blue screen. A trainer hid inside the car during the scene. A trainer released the raccoon from a crate and a second trainer holding a bait stick lured the raccoon into the car. The snake was placed on the actor by its trainer and removed immediately at the end of each take. The actor brushes off CGI snakes and spiders when he jumps out of the vehicle. The car was never moving when there were animals in it or nearby it. The street was closed off to traffic while this sequence was being filmed.

In the scene in which the dog relieves itself, a piece of rope was tied between two posts very low to the ground. The dog was trained to sit on the rope so it looked as if he were squatting. A prop dog dropping was placed underneath the dog.

For the scene in which the animals are entering the ark, the animals were filmed separately, walking up a ramp in front of a green screen. One trainer would release the animal at the end of the ramp and another trainer would retrieve it at the opposite end. Bait sticks and toys were used to encourage the animals to continue up the ramp to the awaiting trainer. Most animals were filmed one at a time and then copied by a computer in post-production to make it appear as if there were two of them. The ramp used was sturdy, wide and reinforced with cleats to give the animals better traction. Side railings and a safety fence were used for extra protection for all creatures big and small. The animals shown inside the ark were also placed on their marks by trainers and filmed in front of a green screen. Hay was laid down for the animals' comfort.

Humans run onto the ark when the flood starts. Animals are seen in pens and acting naturally. The animals were placed on their marks and trainers remained nearby. On cue, 153 extras and actors came rushing up the ramp and past the animals. These actions were thoroughly prepared and rehearsed to ensure the animals' comfort with the actions.

After the ark crashes into the steps of a building, the animals exit quickly. This scene was achieved in the same way as the scene with the animals being loaded into the ark. Trainers led single animals with leads or lines down the ramp in front of a green screen. Trainers surrounded the scene and an awaiting trainer held food or a bait stick to get the animals to look and walk in certain directions. A motion control camera was used to give the appearance that the boat was rocking, shaking and finally crashing and the water from the broken dam was computer-generated. The ark never actually moved or got wet! A rain machine was used for rain effects, but it was only used on the humans in the film. A computer created the rain seen falling on the animals.

As the ark begins its journey we see some of the animals appear to be jostled around inside. The production built an 8-foot platform with handles, which stood 6 inches off the ground. To create this scene, a trainer would put the animal on the platform and crew members and trainers used the handles to slowly rock the platform. Each animal was filmed separately and in front of a green screen. For the birds in this scene, a similar perch was built eight feet off the ground and fastened to two stands. A monofilament line was attached to each bird to ensure it would not fly away. The trainer then placed the bird on the perch. A second trainer stood on a ladder near the perch and controlled its movement. This action was filmed on a closed set with only necessary crew members. All birds were brought to the set in cages by trainers. A motion control camera was also used to film some of this sequence. The shaking camera gave the appearance that the ark was shaking.

As Evan drives to his office, he sees animals of various species all over, walking in pairs. This scene was filmed in separate shots. The animals were brought onto the set one at a time and filmed in front of a green screen. Animals were never on the street or near moving cars.

Birds fly into Evans' office through an open window as he sits at his desk.

The set was enclosed in a net. As an extra precaution, trainers with nets remained nearby. Some birds wore tethers. Birds were used one at a time in most cases. In some shots, birds were used in small groups and placed on and around the actor as the trainers stood just off camera. With the help of CGI, a few birds look like many. Eagles, owls and hawks were used independently from each other and other birds. The birds were removed from the set prior to any large movements done by the actor. Birds did not fly in from outside. Trainers stood off camera with catch cages to retrieve the birds. In a later scene, Evan is in a courtroom surrounded by animals. The animals were removed from the set prior to the actor standing to walk out of the courtroom.