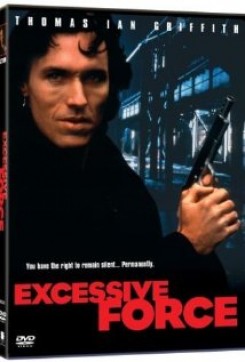 Excessive Force is an extremely violent movie with very explicit language. This is the story of three Chicago policemen, Terry, Dylan and Frankie, and how they continue to try and catch one of the Mafia's leading drug dealers, Salvador DiMarco. A large scale drug bust has been arranged by the police department to catch DiMarco, but just as the trio are about to break into the building where the drug deal is taking place, their cover is blown by a Mafia member outside, who fires a warning shot for the mob inside to hear. The three go unscathed, but the criminals are able to escape capture and flee the scene. Unfortunately, three million dollars of Mafia money also turns up missing. DiMarco kills his own man for losing the money and sets out to find the three cops, of which he suspects as the thieves. First DiMarco has Dylan kidnapped. After Dylan has been extensively tortured, DiMarco is convinced that he is not the culprit and has him killed. On the day of Dylan's funeral Terry and Frankie are in attendance at the services. When Terry brings Frankie back to his apartment after leaving Dylan's funeral, Frankie enters his apartment building only to have his apartment explode as he enters. This leaves Terry the last remaining suspect on DiMarco's list. Terry, in a rage, goes in search of DiMarco to avenge his partners' deaths. Terry finds Dimarco, but, watching the pathetic man beg for his life, Terry can't bring himself to kill this deplorable fellow. The next morning the papers announce the killing of Dimarco and name Terry as the prime suspect. Terry sets out to prove his innocence and, in the process, uncovers a whole network of corrupt cops, including one cop that Terry (or we) never suspected in this bizarre twist of an ending.

Although more animal action was originally filmed for this picture, after editing, the only remaining animal action consisted of a small kitten which is given to Terry by Dylan for his birthday. The kitten is held, caressed and petted in three scenes.