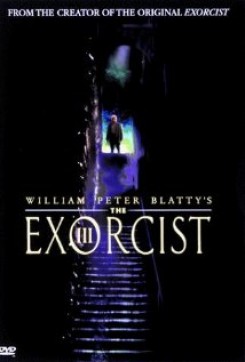 There's still plenty of thrills in this third episode of the Exorcist chillers. It's the fifteen anniversary of the horrible death of Father Damien Karras, and his two dear friends, Father Dyer and Police Detective Kinderman are meeting to keep up each other's spirits. Detective Kinderman is upset about the particularly gruesome murder that day of a twelve-year-old boy. It's one of several similar murders that duplicates the ritualistic-style murders of the Gemini killer who was executed fifteen years ago. The murders continue as the detective and priest try to unravel the mystery. We won't give away any secrets, but you can be assured there's another exorcism before the devil gets his due.

There is a scene with an injured bird in a shoe box which was achieved by placing two match sticks on the bird's wing and holding them in place with skin tape. Later, when the camera pans in on a dead bird in the box, it is a different bird which was rented from a taxidermist. During the exorcism, snakes are seen amidst fire and flames. Fake snakes were used around the fire in the background and real snakes, which were enclosed in a protected glass cage, were filmed in the foreground. The end effect is that they all appear together.