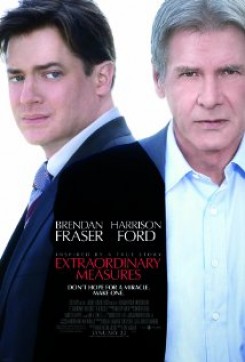 John (Brendan Fraser) and Aileen Crowley (Keri Russell) focus on finding a researcher who might have a cure for their two children's rare genetic disorder.

The dog in this film performs such mild action as being held in actors' laps, being petted, sitting or lying, and digging in the sand at the beach. The actors and crew were introduced to the dog before filming began and instructed on its proper handling. Trainers placed the dog on the actors' laps and allowed the dog to act naturally as it was petted. The dog enjoyed the affection and attention, and the actors were careful when they handed the dog to one another. A trainer stood off-camera and used hand signals to get the dog to stay and look in various directions.

The dog liked to dig, so the beach scene was easy to achieve. The trainer hid a treat inside a special plastic ball. The dog watched the trainer hide the ball in the sand and then when given the cue, the dog happily dug for the ball of treats. Other dogs being walked on leashes near the ocean in the background were walked by their actual owners and were accustomed to this action, as they lived near the ocean and walked on sand often.

American Humane also monitored additional dog action that did not appear in the theatrical release. Those scenes included the dog riding in the family van, the dog greeting the family as they entered the house and the dog playing in the yard with the kids.

The ducks swimming in the lake in a couple of scenes were filmed naturally in a local park. The actors sat on a nearby bench and fed them pieces of bread.