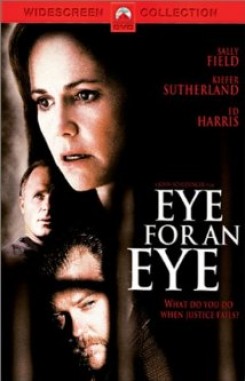 Eye For An Eye

Eye For An Eye is a drama about a murder in Los Angeles involving a seventeen year old girl, Julie McCann, and her mothers determination to see the killer pay for what he has done. Karen McCann is about to have a birthday party for, Megan, her six year old daughter. She is on her way home from work when she gets caught in traffic, picks up her cellular phone and calls home to let them know she will be late. Julie, her older daughter, answers the phone and tells her mom that she is working on the decorations for the party. Maria, the maid, and Megan have gone over to the neighbor's house so that the decorations will be a surprise to Megan. While they are talking, the door bell rings and, Julie goes to the door and opens it, carrying the phone in her hand. The next few moments will be forever embedded in Karen's mind for the rest of her life. She hears Julie begin to scream in the background and can also detect the sounds of a struggle of some kind. Julie starts screaming for her mother as she is being attacked by the man who was at the door. As Karen sits helpless in her car in the middle of traffic, her daughter is fighting for her life and begging her mother to help her. Karen finally gets out of the car and begins running through the street begging someone to let her use their phone, while she keeps Julie on hers. Finally a woman rolls down the window of her car and offers to call the police for Karen. By the time the police arrive, it is too late. Julie has lost the fight between her and her attacker. A week or so later the man responsible for Julie's death, Robert Doob is caught and charged with murder. Unfortunately, the case is dismissed on a technicality and he goes free. Not only was Julie violated by this man, but Karen feels he has violated her as well by walking away a free man. After Doob walks away, Karen decides to do some investigating on her own. She begins by following Doob and documenting his every move until she is ready to go to the police. After a few encounters with Doob, Karen decides to take matters into her own hands and purchases a gun. The film deals with her tracking the criminal and her questioning whether or not she is capable of taking another person's life in cold blood.

Animal action is minimal with the use of a dog and a moth. In the beginning scene, there is a moth flying around Megan's bedroom, casting shadows against the wall. She yells for her mother. Karen enters the room and Megan tells her about the moth. Karen sees the moth land on a lamp shade and slowly approaches it. She cups her hands around the moth and then carries it to the open window, letting it fly free. The scene was filmed in cuts. To accomplish this scene, the trainer merely placed the moth on the lamp shade. The actress picked it up in her hands, walked over to the window and tossed it outside. The trainer was waiting on the other side, out of camera range, ready to retrieve the insect. In a scene when Karen is following Doob, he is seen drinking coffee while sitting at the entrance to an open alley. A dog walks over to him looking as if he wants some food or maybe a drink. Doob takes his hot coffee and pours it on the dog's back, laughing as the dog yelps in pain. To accomplish this scene the trainer merely released the dog and with the use of voice commands told the dog to stay once he reached his mark. Then the actor poured coke onto the dogs neck area and the trainer called the dog back to him. The sounds of the dog yelping as if in pain were inserted later in editing. When Doob delivers groceries to a young woman, he passes a dog behind a fence, in her neighbors front yard. The dog starts barking at him, but Doob makes no contact with the animal as he passes him. Then in a later scene, Doob goes back to the same house to deliver more groceries, but this time he attacks the woman, killing her. During the struggle, the dog can be heard barking in the background and later seen at the fence barking. To accomplish this, trainer one released the dog while a second trainer off camera, used voice and hand signals to get the dog to bark.