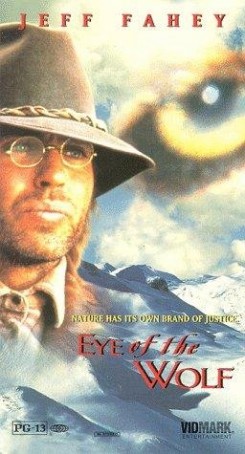 Eye of The Wolf

Eye Of The Wolf is a film about an extraordinary half breed wolf, Kazan, and how he lives between both worlds. Kazan goes from being a guard dog for a mounty to a pet, back to a wolf living in the wilderness of Canada. He has many adventures and different owners but he always comes back to, Jo, the woman that saved him from death. After Kazan's original owner, a mounty, was found murdered, the captain of the mounty's decided to kill Kazan not believing that he would be obedient for anyone else since he was part wolf. But Jo saved him from that and he became her pet and trusted friend. They have many adventures together and in the process Kazan finds himself a mate and starts a family.

There are many scenes of Kazan running through the woods by himself and with other wolves.

In one scene Taggart, a trapper, catches up with Kazan and shoots him taking him captive. Taggart plans on making Kazan mean so he can enter him in a dog fight in town to win a thousand dollars. To make him mean he starves the wolf along with beating him with sticks and holding him under the water in the river. Taggart keeps Kazan's mouth tide with ropes to make a crude muzzle along with keeping his feet tied so he can't move.

In yet another scene Jo lets Kazan go to live in the wild when she and her husband go to town to live for the winter. Kazan meets up with some wolves and he ends up fighting the leader. After winning he becomes the new leader of the pack along with getting a mate.

Jo and her father are traveling across the snowy wilderness in a dog sled when they are set upon by wolves. Her father lets their dogs go so they will have a chance against the wolves. In the meantime Jo and her father ready their guns to fight off the wolves. After the fight is over all the wolves but one is dead or wounded, however, she doesn't attack as Kazan appears by Jo and her baby which is on the back of the sled. Kazan goes with Jo and along with her father, he helps to pull the sled.

Kazan's mate has puppies and while he is away a cougar has come in and killed the babies along with blinding his mate. He finds the cougar outside on a rock and before it can jump at Kazan, Jo appears with a shot gun killing the animal. The scene of the cougar killing the puppies and blinding his mate is never shown. All that is shown is the puppies on the ground and blood on the mother's face.

Kazan now has to catch all their food since his mate cannot see therefore there are many scenes of Kazan hunting for food. In one scene he chases a rabbit and carries it in his mouth after killing it. The actual killing is not shown however, he is seen carrying a rabbit in his mouth which looks to be a real one. Again in another scene he is seen catching a duck for dinner.

In one scene a cougar is lying on the ground after being mutilated by what appears to be the work of wolves. All that is seen is the cougar lying there bloody and half of the carcass gone. Then there is another where the cougar is buried in the snow except for his head. A trapper named Taggart is seen carrying a dead cougar over his shoulder and then drops it to the ground.

In an earlier scene Taggart sets traps for Kazan and his mate to stop them from killing the cougars. They get caught in the traps but are saved by Paul, a friend of Jo's, who is staying at Taggart's shack. Paul buys Kazan and his mates freedom by giving Taggart a hundred dollars and a gold watch.

When the captain of the mounty's is going to shoot Kazan the dog is tied to a post and is barking and waging his tail. Jo is coming out of the church after getting married when she sees the mounty and his gun. She runs over to the scene, throwing herself between the mounty and the dog.

In yet another scene Kazan protects Jo from a trader by biting his leg after the trader has knocked her husband unconscious.