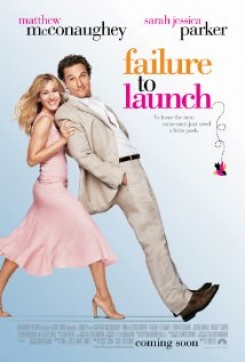 When the frustrated parents of 35-year-old Tripp (Matthew McConaughey) are finally ready for their offspring to leave the nest, they hire Paula (Sarah Jessica Parker), a professional "girlfriend" with a 10-Step Program guaranteed to get Tripp out of the house and on his own in record time.

Tripp tries to impress Paula with lunch on a docked sailboat, but quickly abandons the meal when the vessel's true owner arrives. Seagulls swoop in and grab rolls floating on the water beside the boat and fly up on deck. Four trained seagulls were on call for this action, though only two performed on camera. The seagulls wore a monofilament line during all filming to prevent accidental escape or injury.

When Tripp goes mountain bike riding in the woods with his buddies Ace (Justin Bartha) and Demo (Bradley Cooper), he has a run-in with an aggressive chipmunk. Eschewing the energy bar that Tripp offers, the chipmunk bites his hand and won't let go.

This sequence was filmed both in nature and indoors on a sound stage. The action was set up with the live animal, but also involved an animatronic chipmunk and a "clipmunk" puppet that clipped onto the actor's hand for the main action. The real chipmunk prepped for several weeks and was very tame and accustomed to people. The entire area was enclosed for safety, and handlers rewarded the chipmunk with nuts for responding to simple cues, such as going from point A to B on the log.

When the guys go rock climbing, a chuckwalla (a large lizard) hiding in a crevice bites Tripp's finger. A real chuckwalla was used to set up the shot, but an animatronic lizard did the biting.

In a scene that takes place in the Amazon jungle, a monkey runs up to Demo, climbs on his shoulder, and does a bongo tap on his head. "Krystal," the capuchin monkey used in this scene, is a well-trained film animal used to being on movie sets. Two trainers worked with Krystal and were never more than 10 feet away from her at any time during filming. Her A-to-B pathway was checked and free of obstructions and hazards, and the actor had been prepped in advance to work with the capuchin.

The production used an animatronic dolphin for the underwater "attack" on Tripp as the guys surf, and for the friendly interaction with Tripp at the film's end.