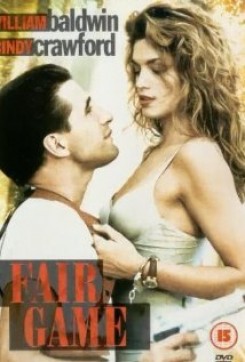 Fair Game is a suspense drama set in Miami Florida about a young family attorney, Kate McQueen. When she requests as part of her client's property settlement the husband's boat, she unwittingly gets involved with a terrorist group. The boat is being used for off shore drilling. However the drilling is not for oil, but for money. The terrorist group, it seems, is drilling into an underwater cable in order to link their computer system to international bank computers which will allow them to transfer large sums of money into any account anywhere in the world. Since the divorce hearing will determine who gets the boat in the settlement, the terrorists are determined to stop the hearing, even if that means killing the attorney. After being nicked by a bullet during a drive by shooting while out jogging, Kate is taken to the hospital for treatment. Upon being released, she is taken to the police station where she is introduced to Detective Max Kirkpatrick, the young officer assigned to her case. Unfortunately she is under the impression that her wound is merely the result of being in the wrong place at the wrong time. Max takes her statement, but forgets to have Kate sign it. When he goes to her home to get her signature, he can see her standing on the balcony watching TV and talking to her cat. As her cat walks back into the apartment, Kate points the remote at the TV and pushes the button. There is a terrible blast. Kate is thrown backwards off her balcony and into the lake surrounding her home. Max immediately runs towards the water, jumping into save her from drowning, but as he tries to swim back to the bank, someone starts shooting at them from the parking lot. Since Kate doesn't have a clue as to who is after her, Max determines that he had better find out fast before they both end up D.O.A. (Dead On Arrival). Max and Kate must now try to stay one step ahead of the terrorists in order to stay alive. It is not going to be easy as the terrorist group has access to different electrical devices to help them track the two. When Max realizes he and Kate are somehow being tracked through his cellular phone, he gives them the slip by leaving the line open on the phone and depositing it in the back of a truck hauling pigs to market. By doing this, the terrorists follow the truck instead of Max and Kate. After many action packed sequences, Max and Kate eventually outsmart the terrorists.

In the scene where Kate's apartment is blown up, she is first seen pouring milk into a saucer for her cat, which the cat drinks. The cat follows Kate to the doorway of the balcony, but before the explosion, turns and walks back inside the house. The cat and Kate's character were filmed seperately. The shots of the cat were filmed in a studio where a fake set of the interior of Kate's home was built. The cat was never on an actual balcony. The trainer merely placed the cat on his mark beside the saucer of milk and the cat drank the milk. Then using voice commands, the trainer called to the cat from across the room, causing the cat to appear to turn and walk back into the house. Later in post production, the shots of the cat were technically integrated with the shots of the actress on location. When the terrorists catch up with the truck carrying Max's celular phone, they make the driver open the back of the truck and they walk through the pigs looking for Max and Kate, but find the cellular phone instead. This scene was shot in cuts. The pigs were acctually never in a moving vehicle, but were filmed in an air conditioned studio instead. There was ample room for the actors to move through the pigs. To get the pigs to stay in place, the wrangler merely placed food on the floor and let the pigs behave naturally.