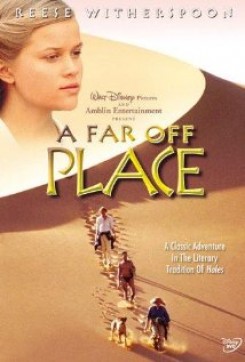 Far off Place, A

Harry Winslow and his father travel to Africa to visit friends, Paul Parker and his family, for Harry's summer holiday. Harry, being from New York, is less than thrilled at the thought of spending the summer in the bush of Africa instead of in Utah skiing. When they arrive Harry meets Nonie, Paul's daughter, but they don't quite hit it off. Harry doesn't understand Nonie and her African ways, and Nonie thinks Harry is a pampered city boy.

One evening Harry watches from his room as Nonie sneaks out of her window. Harry follows Nonie to the place where she is to meet with her bushman friend, Abu. Nonie discovers Abu after he has had a run in with a leopard. Harry helps Nonie take Abu to a cave where she tends his wounds. Abu has the power, which he calls tapping, to see into the future and insists that the two stay the night with him in the cave, claiming that they will be in danger if they leave.

Come the first light of morning, Nonie wakes with a start. She smells something. She goes out of the cave and sees in the distance a smouldering fire. She beats a path back to her home where, to her horror, she finds that elephant poachers have killed everyone at the ranch, including her parents and Harry's father. Overwhelmed with grief, she returns to the cave and informs Harry and Abu of the terrible news, but not before she blows up the ranch house and surrounding trucks where several elephant poachers still remain. Not knowing who to trust or where to turn, the trio set out to cross the Kalihari desert in order to escape being captured and killed by the poachers. They want to get to the water so Harry can return home to America. Abu insists "If the wind can do it, we can do it." With this the three of them and Nonie's dog, Hintza, set out on a long and dangerous journey.

A Far Off Place was filmed in Africa and animal action is throughout. In the opening scene we see various animals, such as elephants, zebras, gazelles, and a wolf gathered around a watering hole. Out of the bush comes four men wielding guns. They open fire, sending all of the smaller animals scattering and the large elephants dead, leaving only one baby elephant alive, who in a pitiful scene leans against his dead mother rocking back and forth. The poachers, who had killed the elephants for their ivory, then remove the tusks from the dead elephants with chain saws..

All the animals were filmed separately for this scene and edited together for the final version of the movie. In order to make it appear like the animals, other than the elephants, were running from the poachers, they sped up the film for the picture. While several elephants were filmed at the watering hole in the beginning of the picture, when the elephants were supposedly shot, only one elephant was present. He was very briefly sedated and was filmed by five cameras. This was edited together to make it appear that several elephants had been shot. Some of the scenes of the elephant going down are, in reality, his getting back up. For this they ran the film in reverse. The elephant had been tranquilized for five minutes by what they call a cocktail, which is a special mixture of drugs used in Africa to tranquilize elephants. It is much safer than the drugs used in the United States for the tranquilization of elephants. In addition, the elephant was carefully monitored throughout as well as having water placed in his mouth and behind his ears. When you see the poachers removing the tusks from the dead elephants, very realistic fake elephants were used. In order to get the baby elephant to appear as though he were going from one dead elephant to another looking for his mother, fruit was placed on the fake elephants. All the elephants in the picture, including the one that was briefly tranquilized, is owned by Viv Bristow, who owns a photography game preserve in Zimbabwe. He works for the government of Africa in their program of darting and moving animals, when necessary, to save them from drought and other potential dangers.

When traveling across the desert, the trio not only encounter many animals, but they are also being pursued by the poachers. Abu speaks to a pack of elephants and asks them to follow him and his two companions to cover up their tracks. Even though it appears on screen like the elephants are following the trio and their dog, in reality the elephants never left their compound. The illusion of them being together was done through matting and editing.

Other animals which they come across in their travels to the water are vultures, crocodiles, gemsbok, and an ostrich. The vultures came from the World Of Birds in Cape Town, which is a private farm in Nambia. The animal they were supposedly eating was fake with food in the cavern of its stomach. In one scene a box is opened and you see many baby crocodiles. These came from a crocodile farm. The box had many air vents in it and a false bottom to make it look like the crocodiles were piled on top of each other, but in reality there was only one layer of crocodiles and they were only in the box for a short period of time. The gemsbok, which are South African antelope, were filmed on a gemsbok farm. In the movie it appears that Harry shoots one of the gemsbok for food and makes a vest for Nonie from the skin of the animal. You do not actually see him shoot the animal and, in reality, no animal was shot. The carcass that was carried back came from a freezer on the farm and the vest he made for Nonie was a vest that was previously made from skins.

There is also a scene with an ostrich chasing Harry. Most of this was shot with the ostrich in one country and Harry in another country, with the scenes being matted and edited together.

When they come near the end of their trip, the trio and the dog come across a crocodile. Both a real and a fake crocodile were used in this scene. To establish the crocodile, a real one was used. When the dog was close to the crocodile the fake one was used. Hintza begins barking at the crocodile and a pack of hunting dogs break loose from a house nearby and begin charging the children. Hintza holds the dogs at bay to protect the trio allowing them to escape across a gorge. A scuffle entails between the dogs before Hintza breaks away and runs towards the gorge himself. You see a spectacular leap from one side of the gorge to the other, but Hintza misses his mark slightly and rams into the other side of the gorge before being pulled to safety by his three friends. In reality the dog only jumped eight feet from one ramp to another with the camera below him in the shot. This was done in one of Universal's back lots. Then the shot was matted and digitally edited to make it appear that the dog jumped twenty four feet from one gorge to another in Africa. The dog you see actually hitting the log on the other side of the gorge was a dummy dog. This was also shot in one of Universal's back lots. In Africa the dog had been placed on the log with a safety wire attached to him to make sure he could not fall, allowing him to be rescued by the children. Fake blood had been applied to the dog. The scuffle between the dogs was done using fake puppets, fake puppet heads, and either muzzles on the dogs or black fencing between them when the real dogs were used.

As they are crossing the desert, Abu is bitten by a scorpion. Scorpions are very prevalent in the area. This one had been caught locally and then released. As Nonie is lying on the sand during a storm, a Mantis appears. The Mantis belonged to an individual and was returned when the filming was over. The leopard that you saw in the beginning of the film was a taxidermied leopard that was rented from a local store.

In the end the children get to the water but not until after the man responsible for the poaching is caught. There is one scene near the end of the picture where you see a cave full of ivory. All the ivory had been made of plaster.

Other animals seen in this film were giraffes that were filmed in a local national park and two love birds in a cage that were privately owned. In one scene, you also see the dog with a stick of dynamite in his mouth. Of course there was no dynamite in the stick.

Annie Olive Crona, Zoologist, was the animal coordinator for the film. Ms. Crona spent 20 years living in Africa and is presently the Zoologist at the Sweden Zoo, one of the few opens zoos in the world. No fast movements from the cast or crew were allowed when the animals were present. Wildlife Conservation approved all scenes using animals and was present during filming.

Patty Pink represented The American Humane Association on the set. She has been in environmental education since 1961, and makes documentaries on wildlife in Africa where she has won several awards. She is also the author of several books on endangered species. She was assisted by Julie Edwards and Tayna Pitcher, both from Environment 2000 in Zimbabwe. They head the Rhino Survival Campaign in that country and work on school environmental education programs.