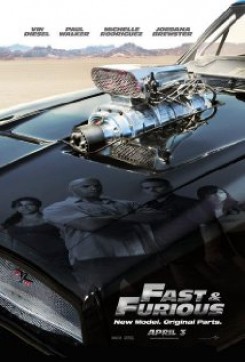 Dominic Toretto (Vin Diesel) and Brian O'Conner (Paul Walker) are reunited and forced to confront a drug kingpin who is flooding the country with drugs and crime.

American Humane did not monitor the cockfighting scene because the production did not establish a contract for our oversight of filming at a foreign location. After screening the film, concerns for how the action was accomplished led American Humane to rate this film Unacceptable for the following reasons:

The production chose to film in a country where cockfighting is legal (Mexico), whereas in the United States, it is illegal.

Before filming, production informed American Humane that they would be filming these cockfighting scenes in Mexico. As a nonprofit organization, American Humane's required criteria for monitoring filming in international locations involves a contract and additional fee, which production declined. American Humane then expressed extreme concern to the production regarding this potentially illegal and inhumane activity and strongly discouraged the filming of these scenes in the absence of American Humane supervision.

American Humane explained the need for any animal fighting scenes to be simulated and that the animals should not be aggressive toward one another or make contact with one another.

During the fight scene in the film, the birds appear to make contact with each other, which is in direct violation of American Humane's Guidelines for the Safe Use of Animals in Filmed Media (see guideline 1-42), which the production had access to before filming. Because American Humane was not on set to supervise the action and cannot attest to how it was achieved, we cannot be sure whether the action was real or simulated, nor can we verify humane treatment of these animals. To voice your concerns, please contact Universal Studios.

During the opening sequence, a man drives a truck with his pet iguana sitting next to him. The man feeds the iguana some of the power bar he is eating. As a chase ensues, the man picks up the iguana and jumps out of the moving truck. This scene was filmed on a stage in front of a green screen, in a mock truck cab. The actor was introduced to the iguana and instructed on its proper handling before filming began. A special soft mixture of strawberries and banana bread replaced the power bar. The actor was well-rehearsed to pick up the iguana and hold it close to his chest as he jumped down a short distance onto a stunt mattress. A trainer immediately retrieved the lizard.

American Humane also monitored intense action involving a pit bull attacking a man, but it was cut from the theatrical release.