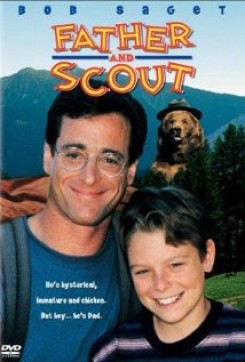 Originally filmed as a Movie of the Week for television, Father and Scout is the story of a father, Spencer, and son, Michael, who have had difficulty understanding each other. Michael's mother has always been there for him, but Spencer, a successful writer, has not had much time. Although Spencer has taken Michael to movies in the past, the two of them have never been away for a week-end together. When the chance comes for a father-son campout, Michael is thrilled and hopes his dad can attend. Spencer begrudgingly agrees and they set off for a week-end of fun camping in Catalina. Their hilarious adventures are what ultimately give Spencer and Michael a new found respect for each other.

Animal action is minimal with only one scene involving an animal. The scene takes place during the father-son campout where the group is in an old silver mine, on a treasure hunt. Spencer and Michael come across a hidden passageway and decide to explore it for the treasure. In an alcove on a ledge, Spencer picks up a dusty old jar. A rat, apparently hiding, runs from the ledge. For this scene, the trainer had placed the rat on the ledge. In reality, the rat was merely running to a plate of food. A table was placed next to the ledge out of camera range, so the rat could not fall.