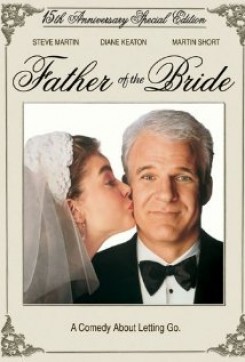 Father of The Bride

Father of the Bride is the hilarious re-make of the 1950's MGM Studios film that starred Spencer Tracy and Elizabeth Taylor. With Steve Martin in the Tracy role there are, of course, more sight gags, but there are many warm and touching moments that make the character vulnerable and human. Nina and George Banks are a happily married, middle-class couple. When their daughter Annie returns home from a vacation in Rome and informs her parents that she is engaged to Bryan MacKenzie, whom she met on the trip, Nina is delighted but George can't adjust to his "little girl" getting married. It makes no difference that Bryan is a fine man from a good family and with a brilliant future, George takes a negative attitude about everything. When the bills for the wedding begin mounting, George becomes unglued in a supermarket and ends up in jail. Martin Short is brilliantly funny as a professional wedding planner who is condescendingly tolerant of George's penny-pinching. In the end George come to grips with his mid-life crisis and in the process discovers the meaning of family life.

On the first time visit to his well-heeled future in-laws, George's curiosity gets the better of him during a trip to the bathroom. His snooping is short-lived however, when a pet Doberman turns guard-dog after discovering George under a desk. The dog growls at George and together with another pet Dobie aggress the frightened George out of the house and eventually into the swimming pool. This scene was shot in cuts. For the growling, the dog responded to his trainer's verbal commands. Other moves were accomplished by the trainers giving hand and verbal cues just out of camera range. Swans are rented to add a romantic atmosphere to the garden wedding reception, but, unfortunately an unprecedented snowfall forces the wedding party indoors. The swans are transferred to a bathtub. As George is running down an icy garden path he jumps over an errant swan and continues to slide a few feet down the path. Since this scene was filmed on a spring evening in Southern California, the snow and ice were fake. A mature and stable swan was positioned on the walk facing a grassy area. Due to the lateness of the hour, the swan was more interested in dozing rather than moving and stayed in position. A stuntman ran down the walk, jumped over the swan, and slid on the icy material strategically placed on the other side of the swan. The script writers are to be commended for a subtle humane message that is delivered to the audience during a discussion of the wedding dinner menu. When it is suggested that veal be served for the main course, Annie rejects the veal because of the inhumane treatment of the calves.