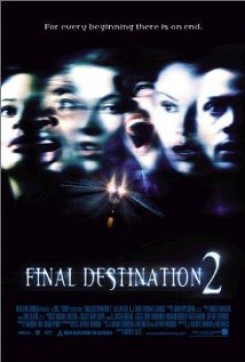 This sequel to Final Destination begins as the first anniversary of the plane crash depicted in that film approaches. Five survivors of the first drama all die in freak accidents while the visionary, Clear, retreats to a padded cell in a mental institution. When a Florida college student, Kimberly, sets off with her friends on a road trip, she has a vivid premonition of a catastrophic car accident. The image is so horrific that she stops traffic thereby surviving the envisioned accident that the through traffic incurs. Escaping this accident, compels her to seek out Clear, but places her in death's path of destruction. Now, Kimberly, along with the other survivors of her premonition, must find a way to save themselves.

A large aquarium in a dentist office proves fascinating to a young boy who watches as the fish swim around. Suddenly one fish gets caught in the filter. An aquarium store supplied and maintained the aquarium while it was on the set. A rubber fish was used for the fish that appeared to be caught in the filter. A monofilament line was tied to the rubber fish and a crew member off camera manipulated the line.

Pigeons crash into the windows of the dental office. One bird crashes through the glass and into the office appearing to have injured its wing. The bird hops around the glass- strewn floor, flapping its wings in an attempt to take flight while two women try to catch it. The birds flew a short distance towards the camera in front of a green screen. One trainer released some birds from a platform and they flew to another trainer standing off camera whistling and holding up a catch box containing food. To appear as if it could not fly, a trainer gently taped the bird's feet together so it hopped around flapping it's wings. This did not hurt the bird. The glass that was put around the floor from the broken window was made out of rubber.

One of the characters, Tim, runs through a group of pigeons who take flight as a sheet of glass falls from a crane landing on Tim. A total of twenty pigeons were used for this sequence. All of the birds were banded and were counted between takes. The sheet of glass that falls on Tim was filmed separately so the birds were never near the glass. A trainer scattered seed on the cement to keep the birds attentively in place. The birds were released from catch boxes that the trainers were holding. After the actor ran through the group of birds feeding on the ground, a trainer whistled and cued the pigeons to fly. Other trainers and catch boxes containing food and water awaited the pigeons at the end of their short flight.

In another one of Kimberly's premonitions, a dog walker crosses the street with several dogs on leash. Two trainers handed the leashes of five dogs to the actor. The dogs were all familiar with each other and the actor. The trainers stood off camera while the actor walked the dogs a short distance. The trainers retrieved the dogs when the scene was completed.

In another scene, a man holds back a snarling, growling dog as he answers the door. The trainer stood behind the camera wearing a bite sleeve. This is a padded sleeve that is worn for training police and guard dogs. Another trainer doubled as the actor for this scene and held the dog by the collar. When the dog saw the sleeve, it began to go after it as it was trained to do. This gave the appearance that the dog was agitated.