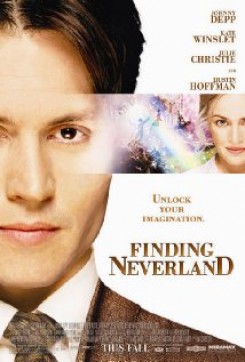 The story of J.M. Barrie's friendship with a family who inspired him to create Peter Pan.

American Humane's Film & Television Unit did not monitor the foreign production Finding Neverland, which was filmed in England. American Humane's Film & Television Unit's work is funded by a grant from the Industry Advancement and Cooperative Fund – administered by trustees from the Screen Actors Guild (SAG) and the Alliance of Motion Picture and Television Producers (AMPTP) – which allocates resources solely to cover domestic SAG projects working under the SAG/Producers codified agreement.

Productions filming abroad do have the option of contracting for American Humane's monitoring services. However, this does not guarantee that the films will receive American Humane's End Credit Disclaimer, since it is awarded exclusively on the basis of the animal treatment during production. Finding Neverland's filmmakers did not request American Humane's services for this production. And, because American Humane was not present to witness the extensive animal action firsthand, the film is rated "Not Monitored."

The public should be aware, however, that Finding Neverland carries an end credit regarding the treatment of the animals that unlawfully adopts American Humane's trademarked "No Animals Were Harmed"™ Disclaimer language. American Humane has consulted its legal counsel regarding this trademark violation and is notifying the producing company to cease and desist the use of the film's unauthorized end credit.