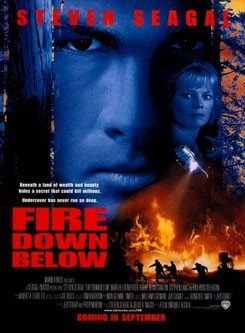 Fire Down Below is a film about John Taggert, an Environmental Protection Agent, trying to find out who killed his friend and fellow agent, in the hills of Kentucky. What he finds is an illegal chemical waste sight and a town either afraid to say anything or to money hungry to stop it.

In one scene, Taggert is sitting on his bed when he hears a noise. When he goes to the window he finds two rattle snakes coiled up on his dresser. He gently takes the snakes by the head and placed them outside the window. Later, the snakes are seen on the floor board of a truck. Other animal action includes two goats seen in the background at a farm and a few dead fish floating down the river. The fish were purchased at a local store. Bee hives are shown but, at no time are any bees seen.