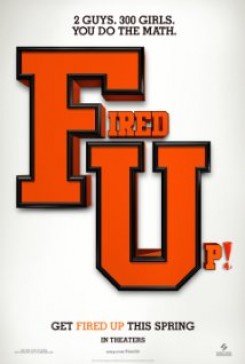 High school studs Nick (Eric Christian Olsen) and Shawn (Nicholas D'Agosto) trade football camp for cheerleading camp in hopes of picking up girls. After convincing the cheerleading team to give them a chance, the boys set out to impress the ladies, who take cheering surprisingly seriously.

The boys convince a group of girls to go swimming at night in their underwear. While they swim, a raccoon approaches the boys' clothes on the shore, grabs them and walks off with them in its mouth. No actors were in this scene and crew was limited. A trainer placed the raccoon, which was equipped with a waist tie controlled by an off-screen trainer, on its mark near the clothes and used a buzzer to get the animal to walk to the clothes, which were lined with food. The raccoon sniffed around near the food for a moment and then trainers cued it with a buzzer to walk along a pathway lined with pens. There were no clothes in its mouth — the clothes were actually clipped to the raccoon's hidden collar to make it appear as if it was dragging the clothes away.