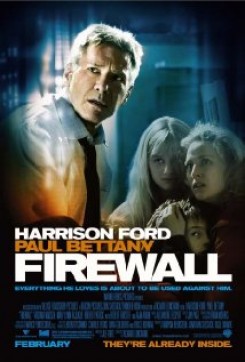 Bill Cox (Paul Bettany) leads a team of mercenaries in his complex scheme to hack into Landrock Pacific Bank by exploiting its prime vulnerability: Jack Stanfield (Harrison Ford), the man who designed the bank's high-tech security system. After infiltrating the Stanfield home and taking Jack's wife and two children hostage, Cox forces his reluctant pawn to incriminate himself as he transfers a $100 million ransom into Cox's offshore account. The tables are turned, however, when Jack channels his pent-up rage in ways the criminal mastermind could not have ever imagined.

A mixed-breed terrier named "Boomer" played the role of the Stanfields' dog, "Rusty," and he is seen throughout the film in typical human-pet interactions. Trainers standing off screen used both verbal and non-verbal cues to achieve all mild action. According to the field reports of the Safety Representative monitoring the production, Boomer was well-prepped for his action, and the actors were aware of the dog's location at all times during his scenes.

In one scene, Rusty is with the Stanfields when the kidnappers transport the family in the back of a van. His non-stop barking eventually angers the thugs so much that they stop the van and abandon the dog on the side of the road. As a safety precaution, non-skid mats covered the van's floor and Boomer had a specially made seat to ride in. One trainer was in the van with the dog and a second handler hid in the bushes nearby. The actors rehearsed this scene several times so the dog would know where the hidden trainer was once he exited the vehicle. Although the driver appeared to remove the dog roughly from the van, he actually just helped Boomer hop out. This second trainer called "clear" to let the driver know when it was safe to pull away.

Soon after, Jack and his assistant, Janet (Mary Lynn Rajskub), pull up and find Rusty on the side of the road. The driver of the car stopped far away from Boomer so as to not frighten him, and the actor had baby food on his face to elicit the loving lick.

The GPS collar worn by the dog had a fake "transmitter" made of lightweight plastic.