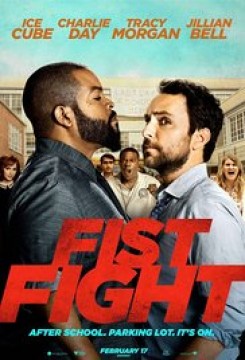 An unyielding teacher challenges a fellow teacher to a fight after school.

In the scene where we see a horse walk down the school hallway, the horse was brought to the set by its trainer and placed on its mark. The horse was wearing rubber shoes to prevent him from slipping. The horse walked past the open door from point A to point B.

When we see the horse drag the actor down the hallway with a rope connected to the actor’s shoes, the horse was actually dragging a stuntman, not the actor. This scene was prepped very carefully. First, a rope was attached to the harness and around the horses' hind quarters. A drag rope was then attached to the harness and the other end was attached by a quick release to the stunt man's leg. The horse was in a corral that had a carpeted floor. He also wore rubber shoes. The corral was high and the black plastic was attached to keep the horses' focus down the hall and to block out the sight of the camera. At the end of the hallway was a tee intersection, which was blocked off both ways with portable corral fencing.  For this scene alone, there were two wranglers along with members of the stunt team and two paramedics. The drag rope was fifteen feet long and the horse pulled the stuntman approximately thirty yards down the hallway. When the horse got to the end of its trajectory, the wranglers stepped out and secured the horse.

On the second take of this scene, they basically filmed the same action but with a sled instead of the stuntman. A quick release was attached to the sled with a camera on the back of the sled. The actor lied down on the sled with the drag rope taught and pulled by the horse. The actor flailed his arms and legs as if he were being dragged by the horse.

In the scene where the actor walks in the parking lot in slow motion and we see pigeons disperse in his path, trainers brought nearly thirty homing pigeons to the set.  Ten pigeons were selected to go into the box used for releasing the birds.  The other pigeons were kept in the second bird carrier. American Humane inspected the area to make sure no predators were in the area.  Each pigeon had a homing device band on its leg for tracking purposes.  When the actor walked to his mark, the birds were released from the box.  As homing pigeons, all the pigeons made it back to their home in Rome, GA.


In the scene where we see the horse outside the high school the wranglers walked the horse to the set on a halter and lead rope from the resting area. The scene was staged in a parking lot in front of a high school. There were over a hundred background actors present portraying high school students. A catch pen was assembled of movable livestock panels. Rubber mats were placed inside the catch pen.  A white rope was attached to the catch pen and stretched out across the back side of the parking lot in front of the school. This created a perimeter around the area in which the horse would work. The wranglers swept the path free of debris. Trainers asked that an announcement be made that the background actors should not touch the horse as he went by.  Wranglers placed two small piles of horse feed on the path. The horse was walked on a lead rope down the path twice then coaxed down the path at liberty.  Everything went well.