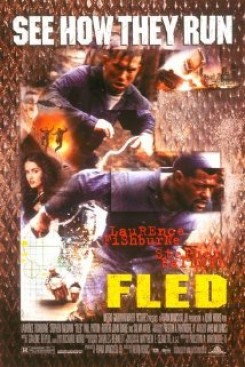 Fled is a film about Mark Dodge, a young computer hacker, who broke into a computer system and stole twenty-five million dollars from Brigantine International. At the time Mark did not know that Brigantine International was owned by Frank Mantajano, a member of the Colombian mob. Christopher Paine, the Deputy District Attorney, wants to put Mantajano behind bars, but his only witness was killed by the mob's men. When Mark hacked into Brigantine's computer system, he unknowingly copied all of the company's financial records. The disk has now become the only evidence remaining between Mantajano and jail. However, Mark is in jail for computer hacking and he is the only person who knows where the disk is hidden. The District Attorney's office must first find out where Mark hid the disk before he went to jail. In order to do this, unbeknownst to Mark, the U.S. Marshall arranges for Mark and Piper, another prisoner, to escape while out on work detail. It is not until Mark's girlfriend gets killed that he finds out that his cohort is actually an undercover cop and that the disk in his possession is critical to the mob and the U.S. government.

Animal action is simple. When Mark and Piper escape from prison, the guards are seen entering the woods with dogs on leashes as they try to pick up the trail of the prisoners. Then later, while still on the run, Mark and Piper enter an underground drainage system and two rats are seen sitting on some pipes as the men run by.