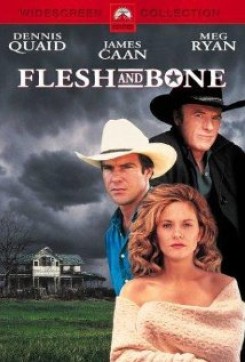 Flesh and Bone begins with a tense opening scene in which a Texas farmer, his wife and son are murdered in the middle of the night, in their home, during a burglary gone awry. The only survivor is their infant daughter who poses no threat in identifying the murderer, a con man who uses his young son Arlis as his accomplice in his scams. The scene shifts ahead 30 years to the present where Arlis, minus his father, leads an honest and orderly life as a supplier of novelties, games, jukeboxes and vending machines to stores and other businesses. On his rounds he stops at one of those businesses, a bar where a bachelor party is in progress. An exotic dancer jumps out of a cake and just as quickly throws up on the groom before passing out. A waitress at the bar talks Arlis into taking the dancer, Kay, back to his room to recover. Kay tells him she is homeless and penniless and talks him into letting her ride with him as he makes his rounds until they can get to the next town where she can stay at a girlfriend's. When Arlis drops Kay at her destination he learns it's not a friend's home but Kay's. In very short order men arrive to cart away the furniture as payment for her husband's gambling debts. Her husband also arrives, a major domestic squabble ensues and Kay takes off with Arlis. Arlis is a quiet man content with his routine existence who doesn't like surprises. In spite of this he and Kay fall in love. It looks as if there is a future for this pair until Arlis' father walks back into his life. Arlis isn't prepared for his next surprise. Kay is the infant daughter who survived that terrible night so many years ago!

In the opening sequence a dog is seen lying on the porch of the farmhouse. The dog reacts to a sound in the night by barking, then growling. The dog then growls at a stranger, a young boy, who appears at the farmhouse. This scene was shot in cuts and the dog was responding to his trainer's verbal cues with food rewards. Chickens appear in numerous scenes with Arlis who uses them for one of the games he distributes called Tic Tack Toe. The game is referred to in dialogue but never demonstrated on screen. Three different chickens appear in one scene, each dyed a different color. Non toxic vegetable dye was used to color the chickens' feathers. As Arlis grooms one of the chickens in his motel room, he holds up a blow dryer to the bird. The chicken used in this scene was dry and his feathers were only fluffed with the blow dryer on a cool temperature setting. The chicken had been properly prepped and was familiar with the dryer. The chicken actually enjoyed the grooming and attention. The chickens are also seen at various times in cages in the back of Arlis' pick up truck and in cages in his motel room. Kay responds to a horse in a field by petting it and finds he has scars on his neck. The scars were not real but applied by a makeup artist using non-toxic makeup. Kay and Arlis then ride two horses through a field. In another brief scene involving horses, the horses are grazing in a field when a gunshot is heard and the horses run in reaction to the sound. This scene was shot in cuts. The horses were not reacting to the sound of gunfire which was dubbed in, but were responding to verbal cues by the trainer.