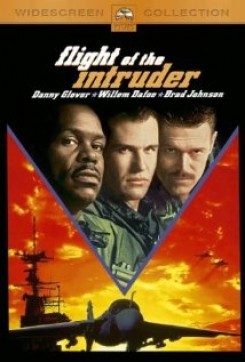 Flight of The Intruder

Flight of the Intruder is an action-packed story that takes place during the height of the war in Vietnam. Jake, a Navy pilot becomes disillusioned after the death of his buddy and co-pilot. Jake feels it was a pointless death as they were only bombing forests. Frustrated with meaningless missions, he decides to go against orders and to bomb the Russian missile sites based near the heart of Hanoi in North Vietnam. He convinces another pilot to join him in the suicidal mission.

A Saigon night club keeps crocodiles in a pool where the patrons play a game of daring where they are in danger of being dunked in the pool. Chickens are atmosphere in the street outside the club. During a brawl at the club, a man is thrown into the crocodile pool. This scene was shot in cuts and there was no contact between the man and the crocodiles. After filming was completed, one crocodile bit another on the nose. The injured crocodile was taken to a veterinarian and was treated for the minor injury. This was an accident and not due to any negligence on the part of the trainer or production company.