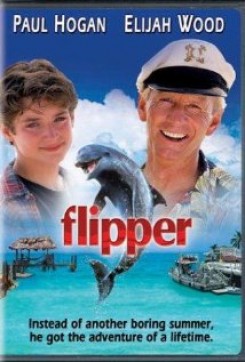 Flipper is a family movie about the friendship between a boy and a dolphin. When a spoiled young teen named Sandy is sent to spend the summer with his uncle, Porter Ricks, on the small island of Coral Key, he never expects to like it. He resents being sent to this remote place, unable to attend the rock concerts he loves and also at the mercy of an uncle he views as merely a poor fisherman and a beach bum. Porter is one of society's mavericks, choosing to live humbly, free from social conventions and in the casual climate of the tropics. He fishes for a meager income and takes Sandy out on his trawler, The Reliable. While out on the boat one day, they encounter another local named Dirk who is leading a drunken band of party fishermen on his boat, the Bounty Hunter, a much fancier craft than Porter's. Dirk, concerned mainly with profit, believes that dolphins are responsible for eating the fish in the area and ruining his business. After watching Dirk murder a mother dolphin, Sandy becomes protective of her baby who has taken refuge behind The Reliable. Sandy directs Dirk away from the orphan and in this moment, as he protects the dolphin, Sandy makes a loyal friend. The dolphin not only follows them to port, but becomes a constant companion to Sandy. As the friendship between boy and dolphin becomes solidified, so do many other friendships for Sandy. He meets a teenage girl named Kim with whom he is quite enamored. He is even able to get a non-verbal child named Marvin, the son of Porter's girlfriend, to come out of his shell and play with the dolphin whom Sandy names Flipper. "Dirty" Dirk is opposed to the dolphin hanging around and tries to capture and kill Flipper. Sandy saves his pal, but, unfortunately, the authorities insist that the dolphin must be in a licensed captivity program or sent back out to sea. They try unsuccessfully to return Flipper to the wild. Within days, Flipper is back in the cove, but appears to be dying. They save Flipper, but discover that toxic waste is destroying the local fishing grounds and was the cause of Flipper's illness. Together with his human friends, Flipper uncovers the actual site of the toxic waste and also the man responsible for dumping the pollutants. This dolphin hero not only brings the villain to justice, but, in so doing, saves Sandy, from a near fatal shark attack. As the Environmental Protection Agency cleans up the pollution, Flipper finds a new dolphin family in the clean waters and changes a boys life forever.