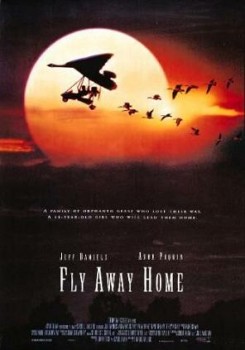 Fly Away Home is a film about fifteen abandoned geese and Amy, the extraordinary young girl that rescues them and at maturity, helps them to migrate South. As everyone knows, geese fly South for the winter and with Fall approaching, Amy and her father must come up with a solution on how to transport the birds South. It becomes a race against time as fall edges closer everyday.

Geese are seen throughout the film. There are many scenes in which the goslings and geese are seen following Amy around in the house, yard, in the barn and as she rides a three wheeler through the yard. They are also seen sleeping with her in the barn and in the bathroom tub, standing on the kitchen table, sitting in a cereal bowl, sitting on the couch, and being given baths in the sink. Some of the goslings are seen on the shower floor walking around as Amy takes a shower. Eventually a large chain link cage is built for the mature geese and they are seen standing inside it in several scenes.

When Amy finds the gosling eggs she carries them to the barn and puts them in an abandoned dresser drawer. At one time when she checks on them a little beak is seen poking out of a crack in one of the eggs. The segments of the eggs hatching were filmed documentary style.

While the goslings are in the house one slips off of the kitchen table, landing in Amy's father's lap. There is another scene where a gosling is seen walking around the rim of the toilet seat and he falls into the water. The trainer placed the gosling on the toilet where he was suppose to just walk around the rim. However, when he saw the water he did what came natural to him and he jumped in, cracking up the cast and crew.

One day Amy is running in the barn and the gosling's are following her and one trips. Igor, the gosling that trips ends up with a permanent limp from his fall. The gosling that walks with a limp was actually born that way. During the flight South, Igor smacks into the glider that Amy is flying. This scene was shot in cuts. A real and a fake goose was used along with computer generated segments and segments filmed before a blue screen.

There are several scenes where the geese are seen following a motorized glider. In one scene the actress supposedly reaches out with her hand to touch the lead goose. For a safety precaution, a guard was placed around the propeller to protect the geese. When the birds are seen flying a flock of geese were imprinted to a boat for the close up shots. Special effects were used when large numbers of geese were required for a particular scene.

Fly Away Home was filmed in Canada. The American Humane Association was not present on the set, however, Operation Migration and other Canadian Humane Organizations were involved in the making of this film.