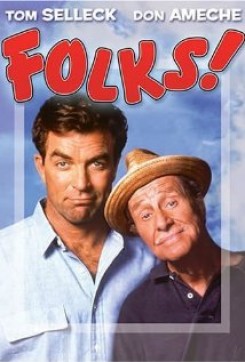 The problems of how to deal with aging parents are explored in this black comedy. John, a Chicago stock broker, leaves his family at home and flies to Florida after receiving word that his mother's been hospitalized. When he arrives at his parents' mobile home he finds his dad confused and unaware that Mom has gone to the hospital. After Dad burns down the trailer and all their possessions while preparing a meal, John decides to drive his folks back to live with him in Chicago. John's understanding wife tries to adjust to the new arrangement, but when it appears the children are endangered by well-meaning but forgetful Dad, she moves out, taking the children with her. John tries to cope, but his firm is in big trouble and mishaps at home lead to disasters for John. Finally Mom devises a solution. She doesn't want to live without her husband but she doesn't want to be a burden to her son. She asks John to arrange a fatal accident so she can die with her husband and her son will receive the insurance money.

Sarah, the playful family dog, is present in many scenes. When John falls out of a bunk bed on Sarah, she nips him in the leg. This scene was shot in cuts. using both a stuntman and the actor. Neither of them actually fell on Sarah. The dog responded to her trainer's verbal commands when nipping at the actor's leg. This is a game to the dog and she doesn't actually bite. This is true another time when she nips at the actor. Again, when she pulls at the star's pant leg, she is merely playing a tug-of-war game. This scene was filmed in cuts with the star and also with the trainer doubling for the actor. The dog responded to her trainer's commands to "take it, take it". When she growls she is also responding to her trainer's verbal cues. Ultimately, Sarah saves the day when she rescues some valuable stock certificates that everyone else has overlooked. The dog ran A to B with the certificate in her mouth. On a family outing in a park they visit a petting zoo containing a lamb, a pig, chickens and a donkey. American Humane had not been informed of animal action in this film and therefore, did not monitor the animal action that was filmed in Chicago. We were contacted when some scenes were reshot in Los Angeles and had a representative on the set.